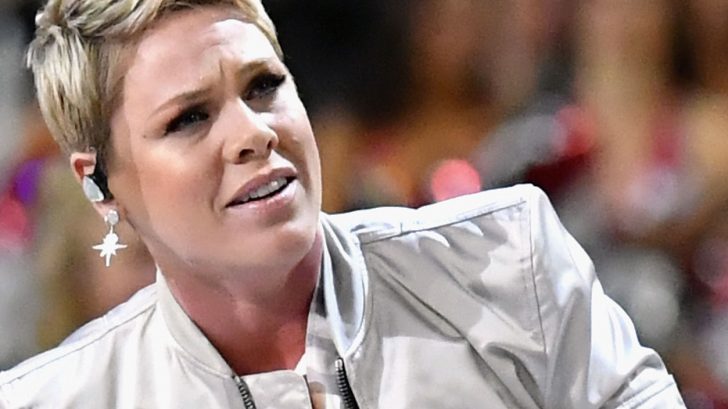 The flu tried – it really, really did – but in the end, Grammy Award winning singer Pink told it to go to hell, spit out her throat lozenge and proceeded to sing the hell out of “The Star Spangled Banner” before last night’s Super Bowl LII. An equal brew of raw power and quiet grace, Pink was an absolute force of nature as she soared her way through the national anthem, smashing it out of the park and nailing notes that give most singers pause even on their best days.

Trying to practice the flu away. I’ve been waiting to sing this song since 1991 when I saw my idol, Whitney Houston, own this song. And now, my chance has finally come. And it just so happens that this chance comes when I have two small Petri dish kids who literally cough INTO MY MOUTH and rub their snot on my cheek. You can’t write this stuff I swear! And here we are. I’ve arrived at another one of my dreams which is slowly becoming a sort of nightmare. I will tell you, this is one of the biggest honors of my life, singing this song in front of my family, my military family, my dad and brother and step mama and family and the world. And the EAGLES!?!?! I promise I will do my best, as I always do. As far as the gremlins that got me into this mess, you can cough at me for the rest of your lives. If it’s a contest, babies, you win. #spreadthelove #spreadthegerms #pleasegivememyvoiceback #ificansingimgonnakillit

Social media lit up with high praise for both Pink’s vocal performance and the sheer force of will that ushered her through the biggest moment of her career:

@Pink with the flu in zero degrees is still better than most without the flu in moderate temperature. Get it Mama. #superbowl

After the week she’d just had – the flu (which, by the way, is killing people), rehearsals, an entire pre-Super Bowl concert at Nomadic Live at the Armory in Minneapolis Friday night, press junkets and the biggest moment of her career, Alecia Beth Moore was not having it.

Yeah but altleast I suck while singing our countries national anthem, and you just suck by yourself on a dirty couch. #winning https://t.co/SfLQr9hVTq

Not that you need my validation, but I saw you live in concert, and you blew my mind. You sang your face off – and you were upside-freakin’-down on a trapeze for crying out loud. Ignore naysayers. You are a massive talent, and it was an honor to have you sing our nation’s anthem.

Chuck you better delete your account. you aint recovering after that L

@rmayer94 file this under "why i'm obsessed with pink"

But at the end of the day, Pink went right back to being her usual sweet self and shared a sweet snap of herself with daughter Willow, thanking fans for their love and support.

All of your prayers and well wishes and candles got me through today. Thankyou so much for all the love and support. We ❤️ you. #SuperBowl2018 pic.twitter.com/1jbojyFjqc