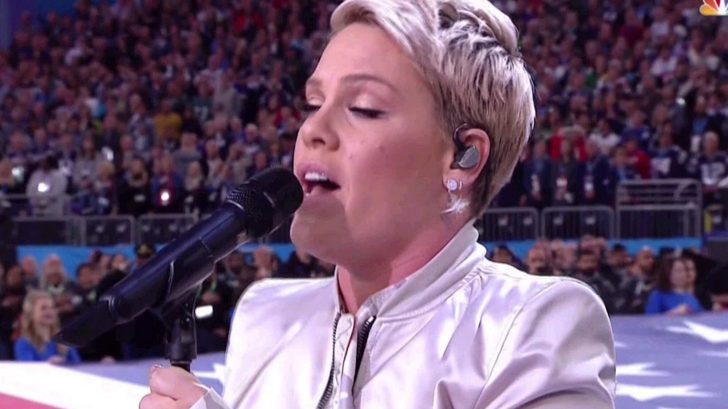 Not even the flu could keep Grammy Award winning singer – and lifelong Philadelphia Eagles fan – Pink from delivering one seriously majestic rendition of the national anthem at this year’s Super Bowl LII.

The 38-year-old singer/songwriter came down with the flu late in the week, struggling through rehearsals on Thursday and Friday night’s pre-Super Bowl concert at Nomadic Live at the Armory in Minneapolis, at one point stopping her band during her chart topping hit “Beautiful Trauma” to apologize and say, “I can’t do it.”

Trying to practice the flu away. I’ve been waiting to sing this song since 1991 when I saw my idol, Whitney Houston, own this song. And now, my chance has finally come. And it just so happens that this chance comes when I have two small Petri dish kids who literally cough INTO MY MOUTH and rub their snot on my cheek. You can’t write this stuff I swear! And here we are. I’ve arrived at another one of my dreams which is slowly becoming a sort of nightmare. I will tell you, this is one of the biggest honors of my life, singing this song in front of my family, my military family, my dad and brother and step mama and family and the world. And the EAGLES!?!?! I promise I will do my best, as I always do. As far as the gremlins that got me into this mess, you can cough at me for the rest of your lives. If it’s a contest, babies, you win. #spreadthelove #spreadthegerms #pleasegivememyvoiceback #ificansingimgonnakillit

If Pink was still sick at the time of her riveting performance of “The Star Spangled Banner” just before kickoff today, we’d never know it; an equal brew of raw power and quiet grace, Pink was an absolute force to be reckoned with as she soared her way through the national anthem, smashing it out of the park and nailing notes that give most singers pause even on their best days.

Social media lit up with praise for Pink in the moments after her performance:

for startes, I don't know all the rules of the Super Bowl, but I am pretty sure that Pink just won

@Pink with the flu in zero degrees is still better than most without the flu in moderate temperature. Get it Mama. #superbowl

What an unbelievable performance! Great job today Pink – now go home and get yourself some ginger ale and a hot bowl of soup!