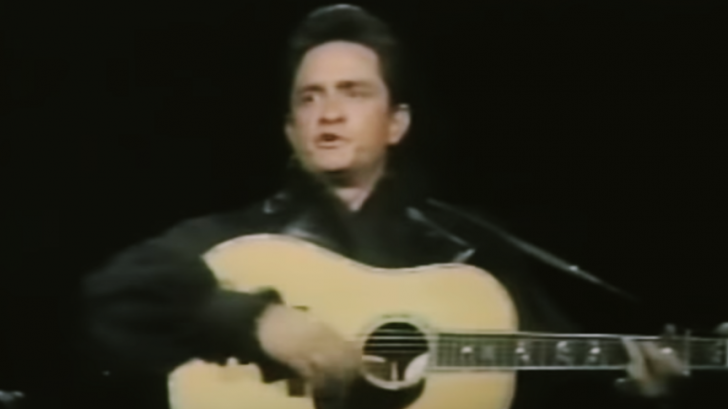 Back when Johnny Cash’s show was still on the air, a very special themed episode ire on February 17, 1971. The variety show also included Neil Young and James Tyler during the “Johnny Cash on Campus” episode. Of course our main man Johnny stole the show! This would be his first time performing what would become one of his signature songs.

During the revolutionary times of the 1960s, lots of protest music was written. Many songwriters came out triumphant and Johnny Cash was one of them. He released “Man In Black” as a single before the release of the album Man in Black in March 1971. Cash’s first time performing the song was just hours after he finished writing the final draft of the song. He still had to write off queue cards!

‘Till Then I’m The Man In Black

The singer/ songwriter had visited a college campus prior to writing “Man In Black,” – and that visit was his inspiration for the song. Of course, the song was semi-biographical, a complex and detailed explanation for his uniform of black clothing. Yet, what we have found out is that he wrote the song days after visiting the college and finished the final draft the morning that he performed it live for the first time!

“When I went out to visit the campus the other day, I talked with several of you and- we asked each other a lot of questions… An idea for a song started brewing then and since I saw you last Saturday I wrote this song. I just finished writing this song- the fourth of fifth the re-write, this morning. That’s why I’ve got to have the cards to remind myself of what the words are of the last version I wrote,” Johnny contextualized before finally performing “The Man In Black.”