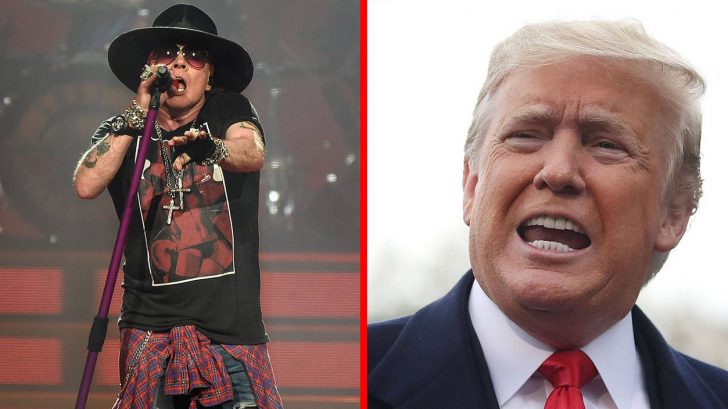 Guns N’ Roses frontman Axl Rose is one of many, many musicians/celebrities that consistently lets his feelings regarding President Trump be heard. As you could imagine, those feelings are not quite favorable. As you would suspect, not everyone is on board with what he’s saying, especially since it’s all rather derogatory, and this time around was certainly no different…

This past Friday, President Trump held a rally in West Virginia, during which the song that was played was Guns N’ Roses’ “Sweet Child o’ Mine”, and BREAKING NEWS: Axl Rose wasn’t having any of it… Here’s some of the tweets that he posted amidst hearing about the song being used.

Just so ya know… GNR like a lot of artists opposed to the unauthorized use of their music at political events has formally requested r music not b used at Trump rallies or Trump associated events.

Unfortunately the Trump campaign is using loopholes in the various venues’ blanket performance licenses which were not intended for such craven political purposes, without the songwriters’ consent.

Are you starting to get the sense that Axl isn’t a fan of Donald Trump? I don’t know, hard to say. But nevertheless, he wasn’t done there and offered some more derogatory thoughts about our President…

Personally I kinda liked the irony of Trump supporters listening to a bunch of anti Trump music at his rallies but I don’t imagine a lot of ‘em really get that or care.

So I’ll just go out on a limb and say that even if I did feel this strongly about President Trump, I certainly wouldn’t be saying these things about him over social media, especially if I had the same following that Axl has. Nevertheless, these are Axl’s words and he’s standing by them.

What are your thoughts on Axl’s tweets? Do you agree with him? Do you disagree? Let us know YOUR thoughts in the comments!