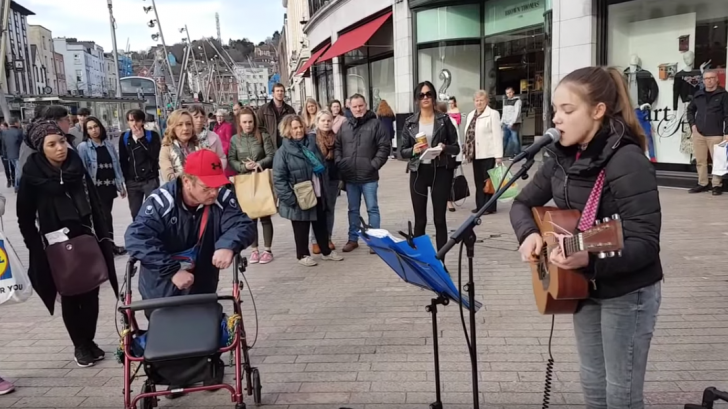 Allie Sherlock is an Irish songstress who decided to pick-up a guitar and stop all foot traffic on a busy street in Dublin, Ireland. Her singing is clean and crisp – a refreshing take on Leonard Cohen’s classic “Hallelujah.” The bends in her vocals are perfectly distributed among the best runs in the song. Her vocals are so impressive, it’s almost like listening to auto-tune. Allie has a flawless tone and great rhythm. She can keep time with her singing and guitar playing without any disruptions. A natural professional at the young age of 13. The crowds she attracts stop and simply watch Sherlock, absorbing the incredible voice. Her Leonard Cohen cover of “Hallelujah” is as poignant as the poetic song writer intended.

No More Busking For This Girl

Allie has built an international fan base. Ryan Tedder from One Republic and music producer,Charlie Puth invited her to collaborate in Los Angeles, CA on a few tracks. Among her biggest fan’s are Ellen Degeneres who had Sherlock perform on her TV show earlier this year. “I was always the kid going around the house singing,” Sherlock explained to Degeneres. The TV host compared her to the impressive Adele. Sherlock was gifted a guitar case with a light up sign saying “Tips!” She graciously accepted the comedians light hearted gift. The Irish virtuoso attracted so much attention that Patriot Records caught wind and offered Sherlock a 5 year contract– which she signed. It’s probably safe to say that Allie Sherlock will not be busking on the streets of Ireland for much longer.