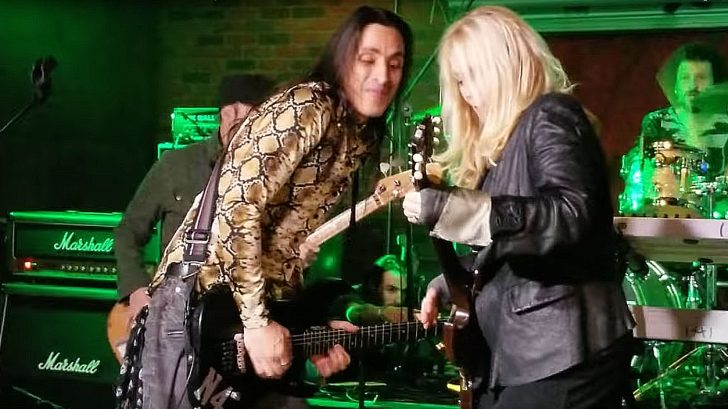 Is it hot in here, or is it just Saturday night’s explosive jam sesh?

Heart’s Nancy Wilson brought a little extra heat to this past Saturday’s Soundcheck Live, a weekly event at LA’s Lucky Strike Live, when she dropped in unannounced. Armed with her guitar, she joined a who’s who of musicians – Liv Warfield from her own band Roadcase Royale, bassist Marty O’Brien and event curator Nuno Bettencourt of Extreme – for one seriously rocking jam session, complete with a cover of Heart’s 1977 classic “Barracuda”.

Thanks to @NancyWilson for joining the “Nuno & Friends” jam at @LuckyStrikeLive! And what about those pipes on @LivWarfield?! @SCLiveOfficial video by Chuck Walker:https://t.co/dq6SYRNzpo

If you were worried about what “Barracuda” would sound like without Ann Wilson there to steer the ship, don’t: singer Liv Warfield is an absolute vocal powerhouse, giving “Barracuda” the respect and power it calls for. Her energy is the perfect setup for guitarists Nuno Bettencourt and Nancy Wilson to shine, launching into a fast, furious duel that proves to be everything we never knew we wanted and everything that Heart fans have been missing since the Wilson sisters’ 2016 fallout.

In a showcase of the best, brightest, and most brilliant minds in rock, it’s only fitting that these two legends, responsible for some of the most iconic music to hit the airwaves, should take the stage together even if only for a night. Relive rock’s big moment on the world’s stage with the video below!