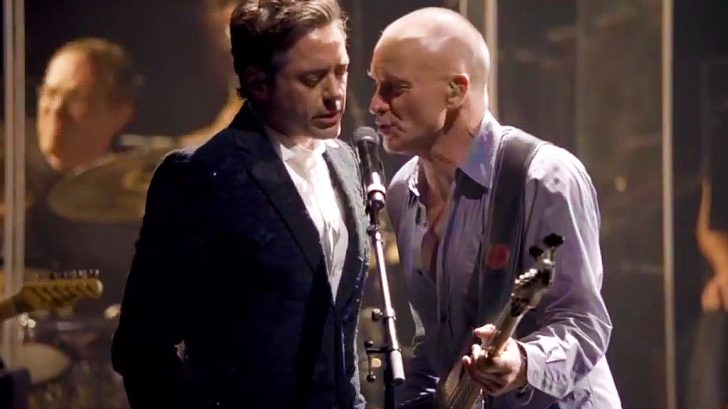 Okay, now this you’ve GOT to see!

We knew that Robert Downey, Jr. has made a career of constantly defying the odds, beating a near fatal drug addiction to come out on top as one of the highest paid and most fiercely respected actors in Hollywood (seriously, go back and look at his body of work from the last decade – absolutely stunning, and no one can convince me that he’s not actually Tony Stark), but he’s also enjoyed a singing career that quite frankly blew us the hell away when we did a little digging.

While you won’t hear him perform Joni Mitchell’s “River” or his own “Man Like Me” any time soon, Robert can be persuaded to rock the mic – especially if it’s for his good friend Sting.

In 2011, Sting celebrated his 60th birthday with a tremendous birthday bash at New York’s Beacon Theatre, complete with a full band and performances by the birthday boy himself; at one point, Robert Downey, Jr. takes the stage for a cover of The Police’s “Driven to Tears,” completely owning this 1980 classic and delighting an audience who knew how talented he was but still found themselves blown away by his showstopping performance.

Never fear, though; while birthday boy Sting was happy to let his friend shine, he wasn’t shy about taking to the mic himself and sharing a chorus or two before the song wrapped to furious applause. Check it out in the video below!

Robert Downey Jr Performing Driven to Tears with Sting.Robert sang the song with Sting at Sting's 60th birthday concert at the Beacon Theatre in New York City on October 1, 2011.