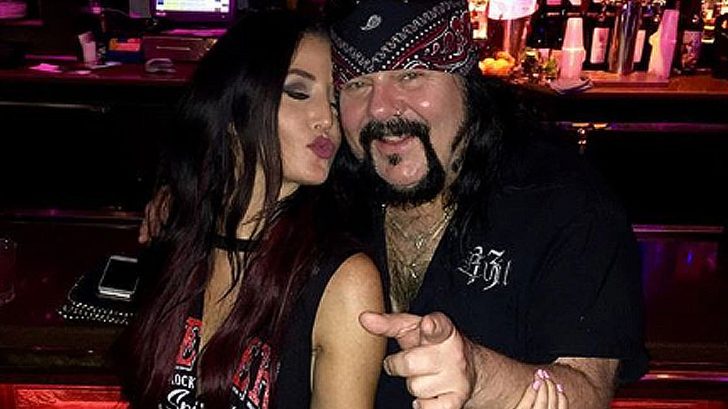 It’s been a devastating few days for the rock world following the sudden, shocking death of Vinnie Paul Abbott, drummer for iconic Texas metal act Pantera. Abbott, 54, was found dead on Friday at his Las Vegas home and while no official cause of death has been given pending autopsy results, sources close to Vinnie Paul say that it was a “massive heart attack” that claimed the late drummer as he slept.

Vincent Paul Abbott aka Vinnie Paul has passed away.Paul is best known for his work as the drummer in the bandsPantera…

Shortly after news of Vinnie Paul’s death began to make its way around the rock and metal communities, Chelsey Yeager, his girlfriend of five years, took to social media to thank friends and fans alike for their kind words and condolences. She has since made her Instagram account private, but prior to that she shared a photo of herself with Vinnie Paul, captioning it with a brief statement.

“I want to thank each & every one of you guys for sending your love! Please please give me & all of our family/friends time. I can’t begin to describe the pain in my heart from this nightmare… I have absolutely no other words.”

At the time of Vinnie Paul’s death last Friday he and Chelsey lived together in Las Vegas, documenting their adventures together over the years across social media.

That's my girl!! Sooo happy to be home!! ?? @chelseyeagerxo

Yep!! Me and my babe @chelseyeagerxo at @chiopenair!! @ozzyosbourne was amazing and thank you to everyone who attended this amazing event !! Cheers ???????? @hellyeahofficial #chiopenair2017 #hellyeahofficial

Tonight my @dallasstars WIN and the @vegasgoldenknights are crushing WINNIPEG JETS!!! It's great to be a hockey fan and my babe @chelseyeagerxo loves it too!! #goknightsgo

Once his autopsy is complete, Vinnie Paul will be flown back to his native Texas where he’ll be buried alongside his mother, Carolyn Abbott, and brother, “Dimebag” Darrell Abbott, who was killed during a 2004 shooting spree at Columbus, Ohio’s Alrosa Villa. The Abbott family has asked for privacy as they begin the process of grieving Vinnie Paul’s passing, and our hearts go out to them during this time.