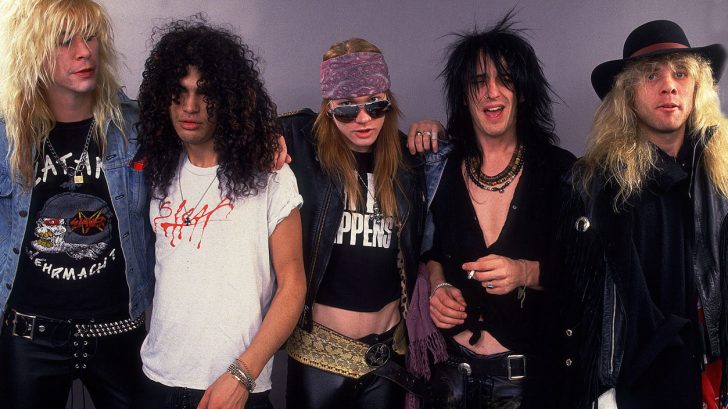 What Could It Mean?

You should already know by now: when Guns N’ Roses are suspiciously quiet, something big is about to happen – and it definitely looks like something is happening behind the scenes.

The Los Angeles rock legends are building suspense for a yet to be revealed twist in their career, going so far as to include a countdown on their official website with the words, “Destruction is coming” and a scrolling photo of all 5 members of Guns N’ Roses in their Appetite for Destruction skeletal forms.

Now, a series of billboards spotted across London are sparking rumors that Guns N’ Roses are plotting an Appetite for Destruction-era reunion – one that includes prodigal sons Izzy Stradlin and Steven Adler. One fan in London who goes by @TriniBoogie on Twitter snapped a photo of the billboard and shared it, adding to the collective freakout going on among Guns N’ Roses fans:

She had a difficult time figuring out where the billboard actually was as it was dark when she first saw it, but the following day she went back and

Now – before you get your hopes up, two things are worth noting.

One, 2018 also marks the 30th anniversary of Appetite for Destruction; the buzz surrounding Guns N’ Roses at the moment could possibly just be hinting at a special 30th anniversary reissue, nothing more, nothing less. Two, it’s still unknown whether Izzy and the guys are even on speaking terms; as we reported earlier this year, former Guns N’ Roses manager Alan Niven said that Izzy actually got as far as flying out and going through soundcheck with the band last year before leaving abruptly, never to return.

On the other hand, this could be a classic case of Guns N’ Roses gearing up for something so secret and so special that they’re waiting until the very last second to reveal it, much like their 2016 surprise gig at The Troubadour.

Took a couple of hours off work to dash over to Camden Town to see if I could find the Guns N Roses billboard that *mysteriously* appeared overnight. Thanks everyone for putting up with my off-topic Instastories today – to be honest I was also practising using stories as part of the ‘Kickstagram’ course I’m doing with @loredanabaranga this week (you can still join if you’re keen! – check the link in her @marketologyuk bio). #destructioniscoming #gunsnroses #gnfnr #Iamafan #wheresIzzy #IzzyStradlin #Camden #gnrfm #Kickstagram #Kickstagraming #Instagramtraining #Instastories #plentytolearn

As fun as it is to speculate about what could be on the horizon, it’s time sit tight and wait patiently until Guns N’ Roses make their big reveal later this week. While we’re hopeful for something special including Izzy and Steven, we’re also realistic about what it may turn out to be – but knowing Guns N’ Roses, they’ll make whatever’s coming down the pipeline something to remember!

This is a developing story; stay tuned to Society of Rock for more updates as they become available.