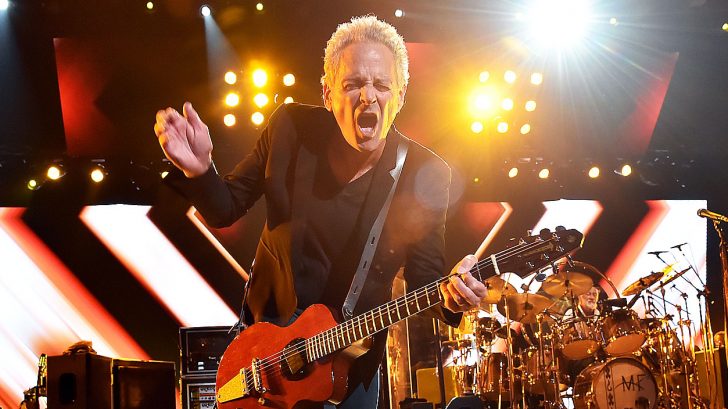 His Riffs Will Kickstart Your Heart!

Probably the most quiet and reserved member of Mötley Crüe, Mick Mars is quietly the foundation of the band. The master of the dive-bomb as created some of the most memorable riffs that can recognized by someone even if their wearing noise canceling headphones. Though he is reserved on stage, he is truly amazing live. He is very reputable for nailing his parts to a tee on stage.

Fact: Early in his life, Mick was diagnosed with Ankylosing Spondylitis, a chronic, inflammatory form of arthritis that mainly affects the spine and pelvis. He was 17 at the time of diagnoses.

With that kind of struggle and pain, wouldn’t it make sense for Mick to just live a quiet life and maybe take a desk job. Maybe, but that’s just not the case! Mick decided to become a rock star and become one of the most influential guitarists of all time. However, even with all his accolades, he never truly got the recognition he deserved. Sure, maybe he wasn’t the most eccentric or flamboyant person to ever take the stage, but that’s only because of his illness. He really should be revered more for his contributions to to the world of hard rock and heavy metal. Nevertheless, he has secured a spot on this list simply because of recognition that remains disproportionate to his incredible playing!

He is humble, Canadian, and awesome! Alex Lifeson has proven to be one of the true Godfathers of progressive rock. He is a virtuoso of the six-string and one of the most influential rock guitarists of all time. So why was Alex Lifeson never given the amount of mainstream attention he deserved. He certainly had everything, the look, the sound, the charisma. It’s truly a mystery.

Fun/Not So Fun Fact: In 2003, Lifeson was arrested for assaulting a police sheriff after intervening in an altercation between the police and his son. He suffered a broken nose and was shot with a taser six times.

Alex Lifeson is at the forefront of an entire genre. That genre being progressive hard rock. So why isn’t he the most revered guitarists of our time? Honestly, who knows!?

For whatever reason, Alex never really blew up in popularity or world-wide recognition. It’s not exactly clear why, he is nothing short of a phenomenal guitarist. Luckily, he still in his prime and sounds better than ever! He truly is the master of complex guitar parts, but the most complex part of Alex’s existence is trying to figure out why he’s as underrated!

Izzy Stradlin, the man, the myth, the legend. Typically, he is not who you’d think of when thinking of Guns N’ Roses. Being the rhythm guitarist of even the most popular hard rock band can leave in the underrated category. If you’re unaware, Izzy was not only the rhythm guitarist, he also wrote the majority of their hit songs such as, Sweet Child O’ Mine, Paradise City, and, oh yeah, Welcome To The Jungle!

You may be asking yourself, with guitar playing and song writing capabilities such as his, how is he not one of the most revered guitarists of all time? Answer… Izzy.

As it is relatively known, Izzy Stradlin is not a big fan of the spotlight. He even left GNR in 1991 for that reason among others. It’s interesting to see what really could’ve been one of the biggest most popular guitarists of all time refuse said accolade.

It also could be that he was the rhythm guitarist and not the lead guitarist like Slash is, and Slash is now one of the (if not the) most popular hard rock guitarists of all time.

So there you have it, Izzy Stradlin CHOOSES to be underrated, which is fine, I guess. Still, it would’ve been nice to see Izzy get the recognition he deserves.

He Will Never Stop Believing!

To make is short and sweet, Neal Schon has written  a good portion of the very songs you sing on a Friday night out with a couple of friends, one of them being Don’t Stop Believing. Though you could argue that Journey’s song aren’t really defined by their guitar work, Neal Schon is certainly no slouch on the 6 string. He is about as shred-tastic as you can get!

We know of his guitar playing capabilities. We know of his song writing abilities. Hell, he even has the look to be one of the greatest of all time (not that he isn’t). So the age old question is, why isn’t he constantly in your newsfeed and on the cover of guitar magazines? The Answer isn’t entirely clear, but when make a few educated  guesses.

His band Journey has gone through some relatively rough patches and line up changes. Their momentum has been hindered from time to time. Still, that shouldn’t necessarily affect his recognition as a guitar playing, right? Well it actually could.

Neal has never really been a lone wolf kid of guitar player, he is devoutly loyal to his band Journey, and any at all musical charges he may have are channeled back to the band. Either way, Neal is still in his prime and sounds amazing. Whether or not he’s underrated, he’s certainly one of the best!

The Foundation Of The Band!

He is a former member of arguably the biggest rock bands in the entire gosh damn world. Though, it has been kind of a unique situation. I don’t think anybody will doubt his abilities on guitar, but his brother Angus is arguably the most iconic guitarist of of the last century.

So what’s the major selling point for Malcolm, here? He’s not all that eccentric and he’s not super shred-tastic (as far as we know). So what is it that makes so that he should be up their in the ranks? Simple! He’s the rhythm guitarist for AC/DC. A band where rhythm is their BEST quality.

AC/DC‘s rhythm is what makes the rock world go round. So in a way, Malcolm has carried AC/DC for all these (not that the other guys haven’t). Malcolm is certainly deserving to be on this list because he is hardly EVER recognized for his massive contributions to all that is hard rock. Nevertheless, it’s not like he isn’t recognized for being a true rock star. I just personally feel that he deserves more recognition than he gets, but I digress, Malcolm, you are amazing!

He Is Royalty Amongst Guitarists!

Now, of course Prince was one of the most highly regarded pop stars there ever was, but let’s talk about guitar playing. Prince built a career on creating some of the most iconic songs that we hold true to our hearts even today. Not to mention the musicianship in each song is simply stellar.

So when asked about Prince, you may not say he’s underrated right off the bat, not as a performer anyway. But has anyone ever really taken a close at his guitar playing? We have, and we can officially report, that it’s awesome!

If you go back and search “Prince Shredding”, the yield of results is amazing. As it turns out, Prince was a master shredder on the mighty axe. Luckily for Prince, he never truly went unrecognized in the world of music, in general. Just in guitar, but I think we can all agree that his guitar playing should’ve been more revered. He was truly a legendary performer and a beloved icon. His guitar playing will be sorely missed, but most of all… HE will be missed!

So, I’m sure you may have heard of this relatively unknown band called the Beatles? They’ve had slight success in like one country and kinda faded out after their first album.

Okay but for real now. The Beatles, not arguably, not probably, they ARE the biggest rock band there ever was. Just trying to list even a small percentage of their accomplishments is full day’s work in of itself. So I’ll just say this. Beatles = Music. It’s THAT simple! The band consisted of John Lennon, Paul McCartney, Ringo Starr, and the man we are going to discuss George Harrison. Dating back to the 60s, they quickly became the biggest musical attraction of this century.

So at this point is it even safe to say that George Harrison is underrated? Well… do me a favor. You’re already on your computer/phone. Google the Beatles. Go ahead I’ll wait…

Finished? Okay. What did you find? The logo? The band members? Abbey Road? Yes to all! Second question. How many of them did you recognize? Two? Maybe three? Who did you recognize? John Lennon and Paul McCartney? Maybe even Ringo Starr? Again, yes. So who was that guy you DIDN’T recognize? That was George Harrison! I rest my case.

A Staple To Rock Guitar!

From a psychologist’s standpoint, it’s really not worth it to try and figure out the man that is Frank Zappa. He was one of the most widely versatile people on planet freaking Earth. The same could be said about his guitar playing. It’s unique to say the least, but you can’t look away. It’s truly spectacular!

So why was he never really given the credit he deserved? Well, a lot of reasons.

He often dabbled in multiple things such as politics. His other interests basically overshadowed his music career as he became infamous for his viewpoints on many different things. He truly became more of a political activist than anything else. Thus his guitar playing was virtually swept under the rug. Which is shameful because his musicianship was truly extraordinary. He single-handily changed the music game with his talents. It’s a shame he never got proper acknowledgement for his playing.

The Crown Jewel Of Fleetwood Mac!

Now, I can’t imagine that there’s a whole lot I need to say to convince you that this fine gentleman deserves to be on this list. He’s an icon and a legend that never really gets enough credit for his amazing guitar abilities. We could go on for hours about how he is one of the greatest and never EVER gets the recognition that he should be afforded.

It’s truly a mystery as to why he never gets the credit he deserves. Again, he has it all, the look, the ability, and the charisma. Could something have not translated to the fans perhaps? Maybe he wanted it to be that way. Who knows!

The point is he is underrated. VERY underrated. His solos, his song writing, and all of the above are qualities that make a guitarist great, and he IS great. We may never know, but he isn’t about to retire just yet. He’s just getting started!

He Is The Champion!

Simply put, Brian May is the co-writer of many rock anthems that we recite as hymnals today. Though he has never really received his fair due. After all, a massive part of Queen’s success is based on Brian May’s prolific playing.

So with all that being said, why is he as underrated as he is? Mainly because of frontman Freddie Mercury.

Not that Freddie Mercury tried to hinder Brian’s momentum or that Freddie Mercury was overrated (he certainly wasn’t at all) it’s just that so much attention was brought to Freddie that Brian just sort of stayed in the background and remained the foundation of the band, and it appears to be that he truly likes it like that. One of the best compliments you can get as a guitarist is that you are/were the foundation of the band. Brian is certainly nothing short of that. He is a man amongst boys. He is a founding father of rock and roll. And we love him for it!