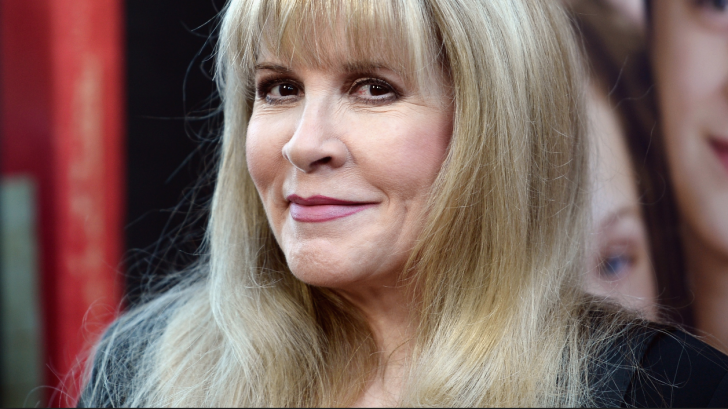 In between her sold out solo tour and Fleetwood Mac’s ambitious 2018-2019 world tour, Stevie Nicks somehow found time to swing by the set of American Horror Story: Apocalypse, reprising her role from the series’ witchcraft themed season, Coven.

It wasn’t just the decades of history and delicious secrets lurking somewhere between Stevie’s blonde hair and endlessly tall boots that enthralled the American Horror Story cast and crew – it was her fashion sense. Costume designers Lou Eyrich and Paula Bradley were among those taken by Stevie’s iconic fashion sense, sitting down with W Magazine earlier this week to discuss exactly what it takes to dress a legend like Stevie Nicks – and a certain accessory that no one, especially Stevie, could resist.

3am selfie after shooting @ahsfx #selfie

“She’s a dream. She’s exactly what you think she would be,” revealed Eyrich. “The first season, she brought her own clothes in but was extremely willing to work in anything or wear anything, but why would you improve upon perfection? She had amazing stuff.”

So great was Eyrich and Bradley’s desire to bring Stevie’s essence to life on screen that they had a pair of gloves made for her by world class glovemaker Dorothy Gaspar.

Gaspar Gloves – See Why They Wanted A Pair For Stevie?

The Flirteese and Flirteese Demi are two other subtly sexy members of the Dita von Teese Collection by Gaspar. Pre-order yours now with the discount code DVT2016 at checkout for 15% off. Discount code valid until Jan 22nd, so don't miss your chance to grab these stunning gloves! Check out the whole collection @ http://www.gasparglovesstore.com/collections/the-dita-von-teese-glove-collection

"The Valentina" gives elegance everything it deserves in this simple yet graceful design, making it an ideal member of the brand new Dita von Teese collection by Gaspar. Hand-sewn by Dorothy Gaspar herself, this pair of gloves is the perfect gift for your #valentine . Buy now with discount code DVT2016 @ checkout for 15% off your purchase. Free shipping world-wide. Discount code valid until Jan 22nd. http://www.gasparglovesstore.com/collections/the-dita-von-teese-glove-collection

Introducing the Dita von Teese glove collection by Gaspar. Choose from some of the most definitively sexy pairs of gloves available. Pre-order now and use discount code DVT2016 for 15% off your order. Free shipping world-wide. http://www.gasparglovesstore.com/collections/the-dita-von-teese-glove-collection

Everything about Dorothy Gaspar’s gloves just screams luxurious and “Hi! We’re expensive, want to put us on your hands?” and so it’s no wonder at all that Stevie graciously accepted the pair made for her. I mean, who could resist something that looks that comfortable?

Paula Bradley shared a bit about the gloves in the W Magazine interview, revealing:

“We have an amazing glovemaker, named Dorothy Gaspar, and we added some gloves into her room should she want to change hers. She didn’t change her gloves, but they did disappear.”

Wonder if we’ll see these gloves onstage during Fleetwood Mac’s tour? We can only hope!