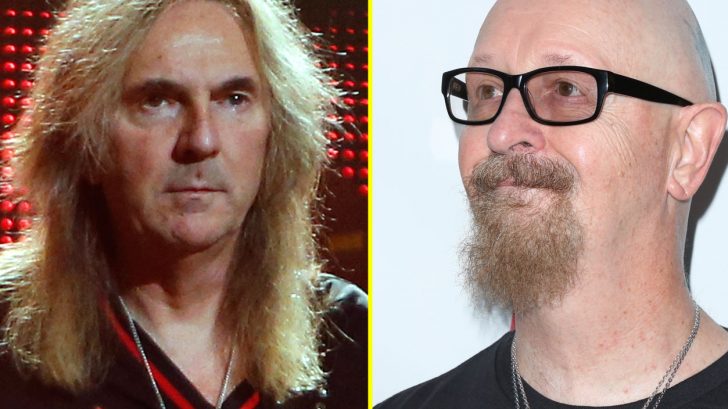 It’s shaping up to be a long, emotional week for veteran rockers Judas Priest. It was announced yesterday that guitarist Glenn Tipton has been battling Parkinson’s Disease for the better part of a decade and as such, must step away from touring due to the progressive nature of the disease. He’s being replaced by Andy Sneap, who co-produced the band’s upcoming release Firepower, but frontman Rob Halford just wants fans to know one thing: make no mistake, Glenn Tipton is still an active member of Judas Priest.

The 66-year-old rock icon elaborated on Tipton’s decision to cease the touring aspect of being in Judas Priest, telling Kerrang!:

“There’s been a lot of emotion today with the announcement, but we’re very happy for Glenn, that he’s been able to make a decision that’s good for him and where he’s at right now,” Halford said.

Yesterday’s announcement indicated that Tipton, 70, is more than happy to rejoin his bandmates on the road when and if his condition allows – something that Halford confirmed, clarifying that “…his role is going to be different. He can’t tour, but it’s going to be great for fans when he comes out every now and then to do ‘Breaking the Law’ or ‘Living After Midnight'”.

Tipton joined Judas Priest in 1974, just in time to record the band’s debut album Rocka Rolla and has remained a driving force in the band ever since. He issued a statement of his own when news broke of his decision to stop touring – one that drew high praise and well wishes from fans who owe a lifetime of rocking and rolling to Tipton’s powerful influence.

It’s overwhelming to see all the love and support for grand master Tipton since we dropped the announcement yesterday. As you all know, GT isn’t a big internet guy so I’ll be calling him today to let him know that all you maniacs are with him and love him very much as we all do x

Glenn is f**king awesome. Thanks for your passion Glenn!!!!!! #GetWellGlenn

Thanks for all the incredible music, Glenn! You've inspired an entire generation of headbangers!

Thank you Master for talent, one of my favorite guitarists in the whole world! Colombia & South america supports you and so it will always be! #JudasPriestForever pic.twitter.com/eRUkAUOzRn

Glenn, just take care of yourself and enjoy time with your family. You’re still gonna be there every time I hear Priest, no matter what.

Give Parkinson hell Glenn, everything will be al right ???

They have been flying the flag for #HeavyMetal for over 40 years! Glenn Tipton is a pioneer of metal guitar! Continued strength, Glenn. #heartofalion

“I want everyone to know that it’s vital that the Judas Priest tour go ahead and that I am not leaving the band – it’s simply that my role has changed,” Tipton begins. “I don’t rule out the chance to go on stage as and when I feel able to blast out some Priest! So at some point in the not too distant future I’m really looking forward to seeing all of our wonderful metal maniacs once again.”

Rest easy, Priest fans; you haven’t seen the end of grand master Tipton just yet. It’s going to take a lot more than that to stop one of metal’s most celebrated forefathers from doing what he loves most!