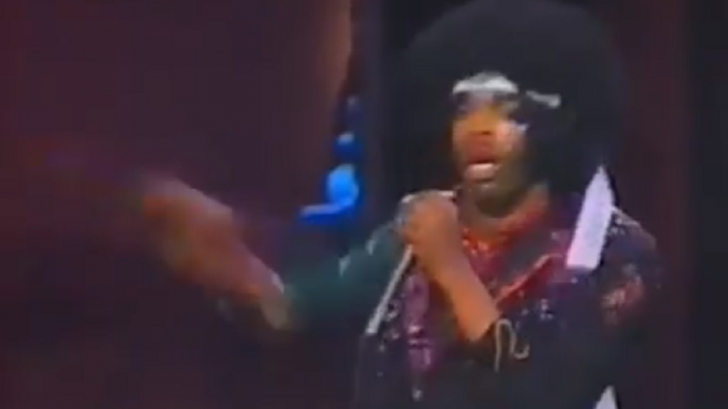 via Rock and Roll Nation/Facebook

Jimi Hendrix is a legend even among his peers. He was an innovator and he released groundbreaking albums that set the bar high for everyone else who followed. And so it’s no surprise that a lot of people want to be just like him which is pretty much why we see several impersonations trying to channel Jimi. We even saw a clip of that busker who not only looks like Jimi but also sounds like him!

But even with so many talented impersonators out there, Michael Winslow is on another level. It’s seriously funny. He doesn’t even say anything for the first few seconds and you already find yourself cracking a smile. And when he talks, it’s like you’re hearing Jimi’s voice. That little bit of performance too is well done.

Although we would have loved to see him do Jimi’s favorite antics like playing the guitar with his teeth or setting his axe on fire, but hey, this is as entertaining as it can get.

USA TODAY previews the April 1969 recording of "Hear My Train A Comin'" in today's edition of the paper. Watch here: https://usat.ly/2HfXYXk Don't miss this #exclusive video documenting the story behind this previously unreleased studio recording from the forthcoming album BOTH SIDES OF THE SKY (Available March 9) #JimiHendrix More info at http://bothsides.jimihendrix.com

Michael Winslow is often dubbed as the “Man of 10,000 Sound Effects.” And he never disappoints. He always delivers the goods. No one goes home sad and unsatisfied after his shows. And you don’t need any more proof than this video of him impersonating Jimi.

“It’s a bit of this, a bit of that. There are visuals, jokes and, of course, sound-effects. And a few surprises. Basically, I’m a vocal gymnast and I’m here to help you forget about your rent.” – Michael Winslow on his style of comedy

He can imitate pretty much any kind of voice. Heck, he even provided the vocal effects for Stripe in the Gremlins. In an interview with Luke Buckmaster, he shared:

“But you know what, it’s sound, man. It’s amazing what a human being can do when you want to play with noises.”

And that’s what makes him the best impersonator.