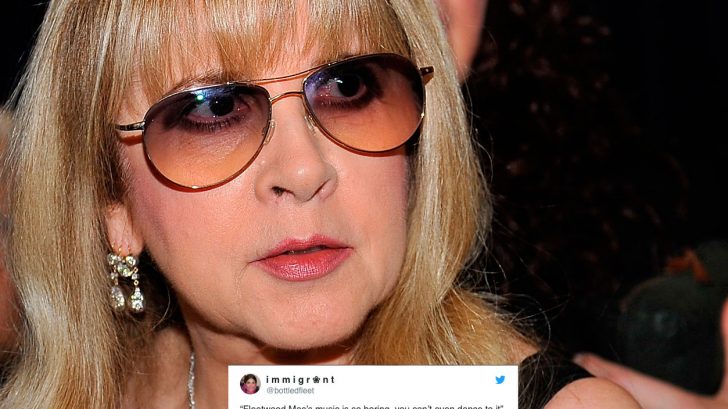 More than 40 years after it first topped the charts, Fleetwood Mac’s 1977 song “Dreams” is a hit once more – and it’s all thanks to one youngster with a pretty great sense of humor (and taste in music!).

It all goes back to March 22nd. A Twitter user who goes by the handle @bottlefleet took to the social media platform, writing “Fleetwood Mac’s music is so boring, you can’t even dance to it.” They then followed up on their own argument with “Me, an intellectual,” adding a video of Alcorn State University’s Golden Girls dance line getting down to “Dreams”.

You can see the video here:

“Fleetwood Mac’s music is so boring, you can’t even dance to it”

The tweet spread like wildfire, amassing over 300,000 likes with another 130,000 comments and retweets. But @bottledfleet wasn’t the only one who saw a jump in numbers from this viral tweet; it’s been reported that Fleetwood Mac stormed onto the Billboard Hot 100 at the #14 slot, more than 40 years after it dominated at #1 in June of 1977.

Rumours, already a global monster with over 40 million copies sold, saw a boost as well. Up 12% with 7,000 equivalent album units, Rumours made the colossal leap from #21 to #13 on the Billboard on the Top Rock Albums Chart as a result of @bottledfleet’s cheeky tweet. Not bad, considering it still holds the record for longest reign for an album by a group at 31 weeks at the top of Billboard’s 200.

The best part of this tweet, as always, is the reaction by fans – which, by the way, include way more millennials than anyone ever realized.

Thus begins my Fleetwood Mac sing-along for the rest of the day. pic.twitter.com/IRhAOBJ8jy

and just like that, the Mac infects another generation

The proof is in the pudding: Fleetwood Mac still rocks as hard in 2018 as they did in 1978, and unless you just genuinely hate good things, there’s no escaping their magic! While you’re at it, be sure to check out this live performance of “Dreams” from 1977 and share it with the youngster in your life!