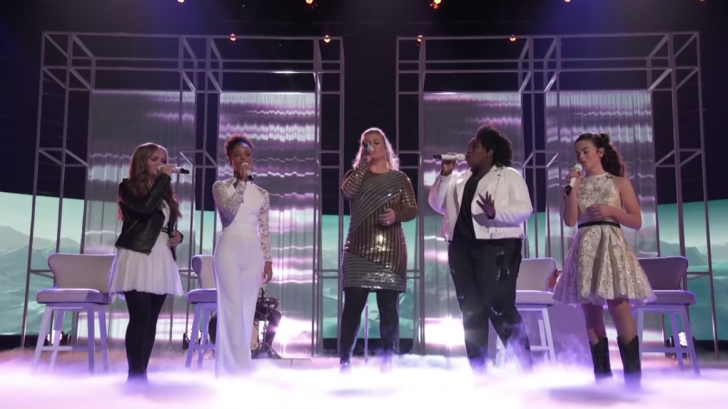 The Voices of Angels

The most recent performance by Team Kelly on the Voice is a group effort by: Chevel Shepherd, Kymberli Joye, Lynnea Moorer, Sarah Grace and their coach, Kelly Clarkson. The ladies give a heavenly performance and envelope the studio with celestial vibes. The harmonization between all 5 songstresses is perfectly pitched and sounds like a descent into the sky, climbing higher and higher into the clouds. Each person brings a crucial sound to the song. Vivacity, spirit, beauty, and elegance are all combined to deliver a powerful performance. There is definitely an effervescent tone to the song with light instrumentals by bongos, guitar, and piano playing in the background. Kelly Clarkson joined her team and proved that the group are definitely competitors not to be reckoned with this season!

There Is No I In Team

Yeah, this was a showcase of Team Kelly blowing the competition out of the water but it took the individual talent of each team member to bring it together. Teen Chevel Shephard tweeted after their stellar performance “Thank you America for saving me and ALL of Team Kelly!” She definitely gives the team lots of spirit. Kymberli Joye has the Whitney Houston feel for sure and covered “Run To You” in the blind audition that won over her coach, Kelly Clarkson who blocked other judges from choosing Joye. Pre-med student, Lynnea Moore is making her family proud and has come a long way from her high school praise band days. During her “Ball and Chain” cover, Sarah Grace wowed all the judges who called her a “pint- sized wonder.”  Team Kelly is a power force this season.