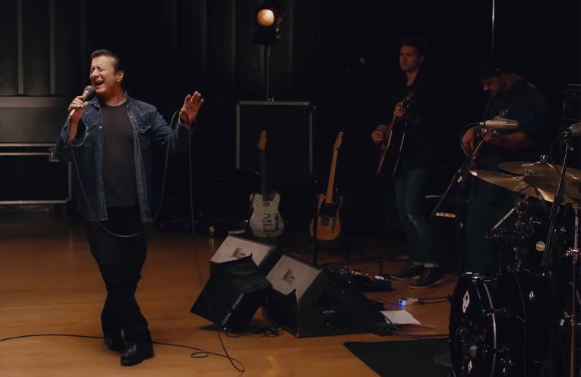 The former Journey vocalist Steve Perry has released a music video for his newest single “No More Cryin'”  The track is from his newest solo album “Traces”. After over two decades years of being elusive, Perry finally breaks the surface again with Traces which is his third solo record and the follow-up to 1994’s “For the Love of Strange Medicine”.

The music video for “No More Cryin'” features a live performance of Perry and his band (not Journey, we must remember he is now going solo again). Perry co-wrote with songwriter Dan Wilson (who also collaborated with the likes of Semisonic and Adele). In the video, the audiences can clearly see how Perry pours all his heart and soul into his performance as he breathes life into the lyrics of the track. Perry describes the song as a love song but not the conventional kind. In announcing the music video.

Tune in to Facebook at 12pm PT on September 24 where you can watch an exclusive look into the ‘Making Of Traces’.

“’No More Cryin’’ is a love song, but not in the way you would think. It starts in one place, and builds and lands somewhere entirely different. It’s got many overtones, and can be applied to so many different kinds of relationships, including my own relationship with past isolation.”

Talking about the album, Perry had previously released a statement saying,

“Years ago, I disappeared. There were many reasons, but mainly my love for music had suddenly left me. I knew that simply stopping was what I had to do if music was ever to return to my heart. Then and only then I would figure out what to do. If not… so be it. For I had already lived the dream of dreams. Many years passed. One day I began sketching some musical ideas with the creative freedom that I was the only one who would ever hear them. One song led to many. My love for music had returned. Then another beautiful thing happened. I found love.”

The simple yet endearing music video was directed by Jeff Coffman. Watch ‘No More Cryin” below: