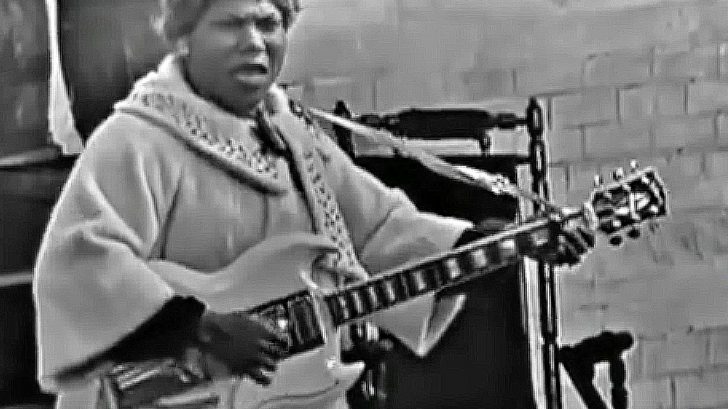 It’s safe to say that rock and roll as we know it wouldn’t exist without the powerful influence of Sister Rosetta Tharpe. Born in Cotton Plant, Arkansas in 1915, Tharpe didn’t just influence the genre – she breathed life into it, her heady brew of gospel paired with heavy distortion on her electric guitar walking the fine line between the sacred and profane and leaving fans torn as to whether Tharpe’s hip shaking brand of music should make them dance or repent. Tharpe was the blueprint by which Chuck Berry, Little Richard, Elvis Presley and Buddy Holly further honed rock and roll’s sound, avid listeners who cited her as a major influence and a fiercely respected favorite; Johnny Cash called her his favorite singer and biggest inspiration.

Welcome to the Hall of Fame, Sister Rosetta Tharpe. The first time Nominee and first guitar heroine is recognized as an…

Knowing all of this, Sister Rosetta Tharpe’s induction into the Rock and Roll Hall of Fame more than 40 years after her death isn’t just fair – it’s one of the Rock Hall’s biggest wrongs finally righted. Fans took to Twitter today to share in the sentiment that her induction into a hall her music made possible, overjoyed at the news but saddened at the fact that Tharpe, who died believing that the genre she created had forgotten her, won’t be there to enjoy it.

Sister Rosetta Tharpe influenced most of the guys in Rock and Roll Hall of Fame. Now she gets to be in it https://t.co/a5Jrz3WDnD

Sister Rosetta Tharpe (1915-1973) another long overdue Rock and Roll Hall of Fame Inductee (2018) performing "Didn't It Rain" in Manchester, England (In the rain! In an abandoned railroad station!) in 1965. Most of the performers that she influenced were inducted years ago. pic.twitter.com/oYXo1U7dKK

Influenced?! She created an entire genre that’s thriving today! Damn ceremony should be named after her. pic.twitter.com/OuUmQdPOGg

@HighSierraMan This is so exciting. Can't wait till new generation of music lovers see the amazing art, soul, passion of Sister Rosetta, a name so deserving of greater fame and honors!