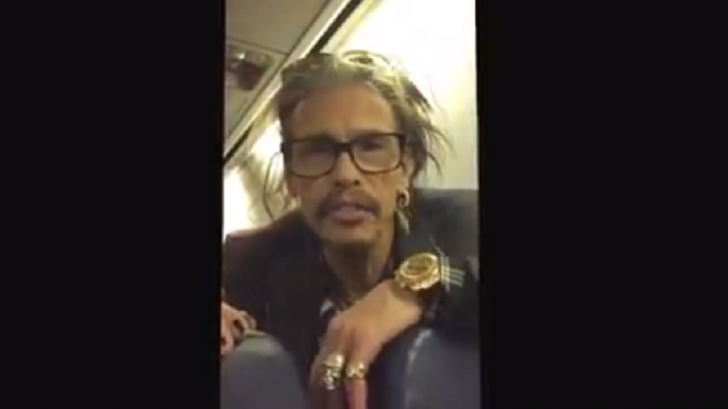 Is This The Coolest Thing Ever Or What?

Steven Tyler is one of the most lovable human beings on the planet. It’s like he was put into this world to buffer all the evil and bad news. What’s not to like about him? He has made timeless hits with his band Aerosmith, he has one of the most unique voices in rock, and he values his fans and goes to great lengths to please them.

He’s also approachable – you can bump into him in a record store, at the parking lot or in this case, while mid-flight in a plane and he will try to accommodate you as much as he can. We can’t really say the same thing for other rockstars on the same league as him.

During a Southwest Airlines flight, he found out that it’s the birthday of the little girl named Carly who was sitting behind him. And in true Steven Tyler fashion, he made it extra special and memorable for her.

IM BOUNCING OFF THE WALLS…TICKETS FOR “AEROSMITH: DEUCES ARE WILD” HAVE BEEN FLYING OUT THE WINDOW! ??PRE-SALE IS OVER…AND NOW EVERYONE AND THEIR MOTHER CAN BUY ?? FOR THEIR BROTHER‼️ CLICK THE LINK IN MY BIO ☝?☝?☝? @aerosmith @parkmgm @parktheaterlv

First off, we’re pretty shocked why he’s not travelling via private jet. But yeah, he’s probably just cool like that. So anyway, he turns around and sings “Happy Birthday” to her. Basically, aside from adding her to his hundreds of thousands of fans, he also managed to hand her a lifetime of bragging rights.

In a few years, she’d look back to this moment and realize how awesome it was. Like, what are the odds of being on the same flight with a rockstar? And how many people got the chance to have no less than Steven Tyler sing them a birthday song? And her mother recorded all of that for the world to see.

We don’t know about you but Steven is definitely at the top of our “Celebrities We Want To Meet” list. He makes everyone proud to be his fan. What a dude!