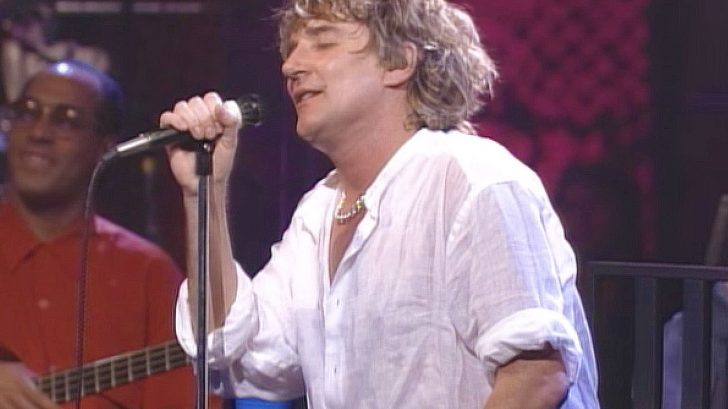 Rod Stewart’s First (And Only) Appearance On MTV Unplugged

One of the greatest entertainers of the last century, Sir Rod Stewart has consistently found new and exciting ways to reinvent himself and bring us takes on old favorites throughout the years – but our favorite moment came in the form of his first (and only) appearance on MTV Unplugged. Filmed on February 5, 1993 Rod’s Unplugged…and Seated performance spawned his second live album and introduced us to a different side of Rod as a performer, one whose gift for music translated into showing us the softer side of his work and included the help of former Faces bandmate Ronnie Wood for the first time in over 20 years.

The result? One of Stewart’s greatest live performances ever, dazzling with a setlist that included a particularly soulful spin on “Maggie May,” complete with a wonderful, minute long intro that showed off Rod’s vocal abilities without the distraction of a band behind him.

We’re used to watching Rod dance his way across the stage, so seeing him seated for the entirety of “Maggie May” would be a little hard to watch if not for the fact that even when abiding by his own rules, Rod finds it near impossible to sit still – standing up, dancing in place, and reaching out to interact with his fans, arguably one his favorite parts of performing in a live setting (and one of ours, too!). If you missed Rod’s MTV Unplugged appearance the first time around, never fear: we’ve got “Maggie May” in its entirety below, so take a walk down memory lane with us by checking out one of our favorite moments in Sir Rod’s glowing career!