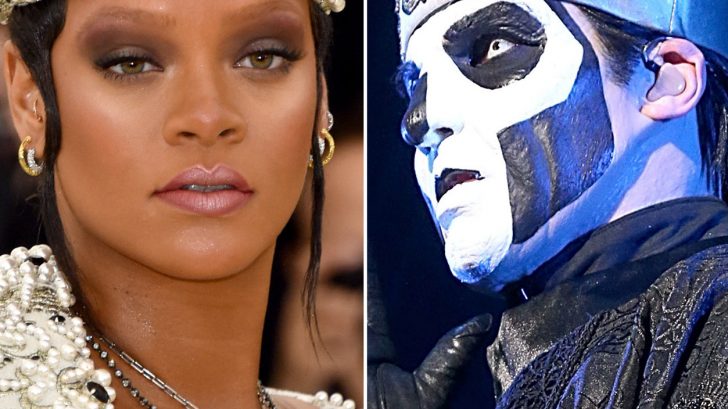 The rock world is used to being shut out of major celebrity-laden events; the Grammy Awards don’t even air the rock and metal portions of the show on television, and on the rare occasions they do, it gets messed up beyond belief. So naturally, last night’s lavish Met Gala followed suit as a laundry list of A-list celebrities, athletes, and socialites turned up dressed to the nines with hardly a second thought given to the rock world as usual.

Except for the part where one celebrity refused to play by the rules.

We weren’t the only ones who noticed.

[MESSAGE FROM THE CLERGY]

We wish to inform you that the clergy needs help in deciding who wore it best. #MetGala #MetGala2018 @rihanna @usweekly @people @voguemagazine @harpersbazaarus pic.twitter.com/c0TdKzzGmP

Papa Emeritus, now known as Cardinal Copia, took to Twitter with a side by side photo of himself next to Rihanna, cheekily asking fans to help decide “who wore it best”.

This isn’t the first time Rihanna’s nodded to the metal community; in the past she’s rocked Judas Priest gear (with Rob Halford’s blessing), a Krokus t-shirt and a really cool leather battle jacket with Suicidal Tendencies and Dirty Rotten Imbeciles patches on it. But her Met Gala getup was enough to leave the guys in Ghost beyond thrilled, offering up their own tribute to Rihanna in return:

[MESSAGE FROM THE CLERGY] We wish to inform you imitation is the sincerest form of flattery. Thank you, @badgalriri. #metgala2018 #metgala

Even better, Ghost fans were tickled pink by RiRi’s outfit too, offering up pretty sweet comments to the 30-year-old “Umbrella” singer.

Okay let’s do something about the Met Gala 2018 :
Like for Pope Francis
Rt for Rihanna pic.twitter.com/Q8FwZmLQjM

Papa of course… But now we want a collab pic.twitter.com/GNB1Cfgk7W

Not a bad night for Rihanna or Ghost, I’d say.