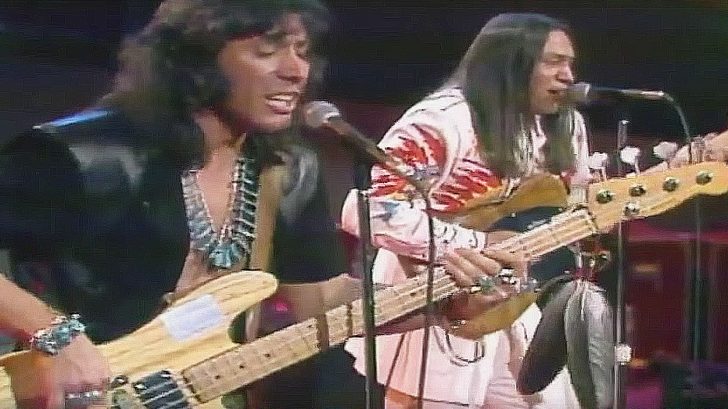 Written in 1974 and featured on their 5th album Wovoka, Native American rock band Redbone’s iconic ‘Come And Get Your Love’ is a bouncy, funk inspired rock classic that never fails to get people up and dancing. It’s one of their most successful and enduring singles.

Shortly after the song’s release, the band appeared on Burt Sugarman’s The Midnight Special for a sensational performance of ‘Come And Get Your Love,’ that even opened up with Redbone guitarist Tony Bellamy performing a traditional dance as the rest of the band chanted in unison. And well, it’s definitely something you can not forget once you’ve seen it.

Fun Fact: Jimi Hendrix loved Redbone! Hendrix, who himself was half Cherokee Indian, inspired siblings Pat and Lolly Vegas to form the band and called Lolly his favorite guitarist.

Singer Lolly Vegas’ voice contains the perfect blend of rock and soul, and guitarist Tony Bellamy wrote the most perfect, ridiculously catchy guitar riff to tie the entire song together nicely. In fact, this is one that we dare you to try not to dance along to – it’s almost impossible!

“Lolly called me up at 3 am; we had just come back from Philadelphia from doing a tour and he said “Pat, can you come over? I think I have a great idea for a song. I want you to come and help me write it.” I was pretty tired and I said, “Oh man, I am not going to come over there and work on this unless we write together.” He said of course.” – Pat Vegas on how the song came about

It’s been featured several times in movies and TV shows – more recently, as part of the OST of 2014 superhero film “Guardians of the Galaxy.”

Come and Get Your Love

"Come and Get Your Love" is a 1974 hit single by the Native American rock band Redbone. The song was written by band member Lolly Vegas and produced by Lolly and his brother Pat Vegas, who was also a band member. One of their most successful singles, the song was originally featured on Redbone's 1973 album, Wovoka; later the song appeared on many "greatest hits" albums released by the band, as well as on numerous compilation albums of the 1970s.The song peaked at number 5 on the Billboard Hot 100 chart in April 1974. It spent 18 weeks in the Top 40 and landed as the 4th most popular song on the Hot 100 for 1974. The single was certified gold by the RIAA on April 22, 1974, which indicates that it had shipped over a million copies in the United States. The song is Redbone's highest charting single and one of two Top 40 hits by the band (an earlier recording, "The Witch Queen of New Orleans", peaked at number 21 in 1972).