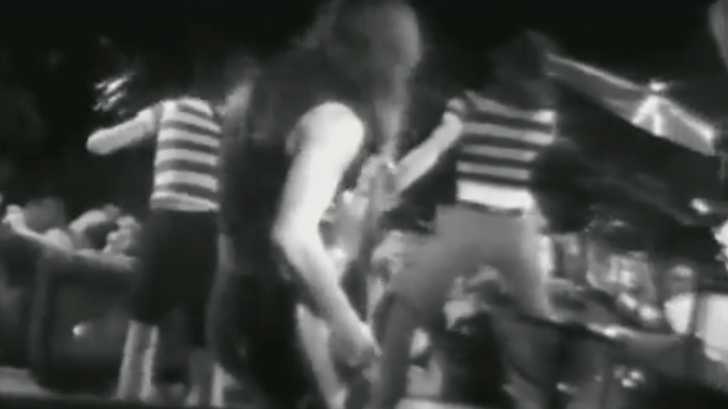 Before playing highly-energetic legendary shows in sold-out arenas around the world, and before Angus even donned the school uniform for life, a fetus AC/DC rocked one of their earliest gigs ever at a place where a uniform is actually required.

Filmed in 1976, a very young, very fresh and up-and-coming band played at a little all-girls high school in their native Victoria, Australia. The gig was set just after the release of the now-iconic rock band’s first major album High Voltage.

Below, you can see some very early  footage of AC/DC crushing “It’s a Long Way to the Top (If You Wanna Rock ‘n’ Roll)” and “She’s Got Balls”. And of course, the students of St. Albans High School ate it all up.

After coming up with the band name AC/DC,  Malcom and Angus Young were too naive back then to even realize that the term actually had a bisexual connotation attached to it that wasn’t particularly polite or appropriate. The first few years of establishing the band also meant they had to defend that the name is free of any associations with sexuality. Because Australians abbreviate slang and nicknames, “AC/DC” became known as ‘AccaDacca‘ in the band’s native Australia. It’s the same way the Australian slang for McDonald’s is “Miccies” or the way biscuits are called “biccies”. In the US, UK, and other parts of the world though, AC/DC is pronounced as is, though a true obsessed fan would say it native.

AC/DC literally stands for the electrical parlance abbreviation “Alternating Current/Direct Current”.  When Malcolm and Angus were beginning to form a new band with a vision to produce a “hard-edged boogie” sound, their sister Margaret had an epiphany for the band name after she saw the initials “AC/DC” on her sewing machine. Her two brothers agreed that the name would represent the power-driven nature of their music.

Understandably, the quality of the video and audio is not as great as you’d usually watch in our modern era, but you can still make out the classic moves of the Angus brothers on stage. The musicality of the band is undeniable either, even 42 years ago.

Watch the beginnings of the legendary band’s legacy below:

WATCH: The earliest live footage of AC/DC in action. Shot in a high school in March '76, before Angus was even in uniform.