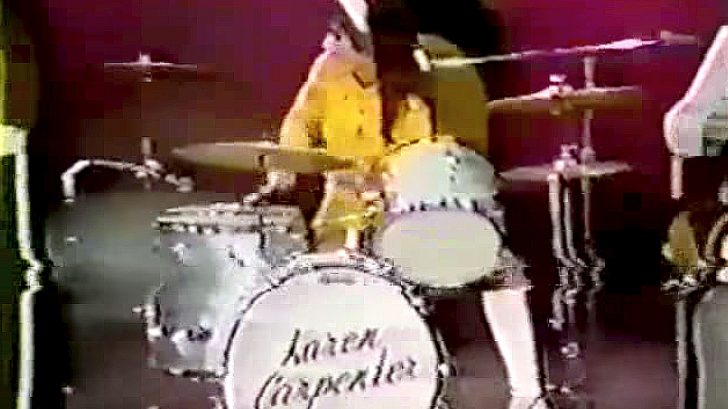 We knew Karen Carpenter as one half of soft-rock duo The Carpenters; beautiful, deeply troubled, and with a voice that was absolutely unbelievable. What most people don’t know, however, is that Karen was a force to be reckoned with behind her drum kit – in fact, her talent was celebrated by drum greats Buddy Rich and Hal Blaine, and even by Modern Drummer magazine. Easily the most bad ass drummer you’ve never heard, Karen’s talents come to the forefront in a YouTube video of super rare footage of her throughout the years, either performing behind the kit as a “drummer who sings” or jamming away in audio clips. And boy, she will leave you speechless.

Our favorite, though, is this: originally aired on 1976’s The Carpenters’ Very First Television Special, one piece of footage features a skit performed by siblings Karen and Richard in which while reminiscing on their high school days, Karen launches into a drum medley that included “Strike Up The Band” and “S Wonderful” after a quirky explanation on how she fell in love with the drums as a teen.

Karen Carpenter was never more youthful and alive than in this footage; with a mile wide grin stretched ear to ear, she’s running around the soundstage and playing every incarnation of the drums possible, never missing a beat or an opportunity to add in a fantastic drum fill or cymbal flourish at just the right time.

Her brilliant sense of humor and passion for her craft shine through during this 8 minute video, and we couldn’t think of a better way to celebrate Karen’s life and gifts than with some of her happiest moments.