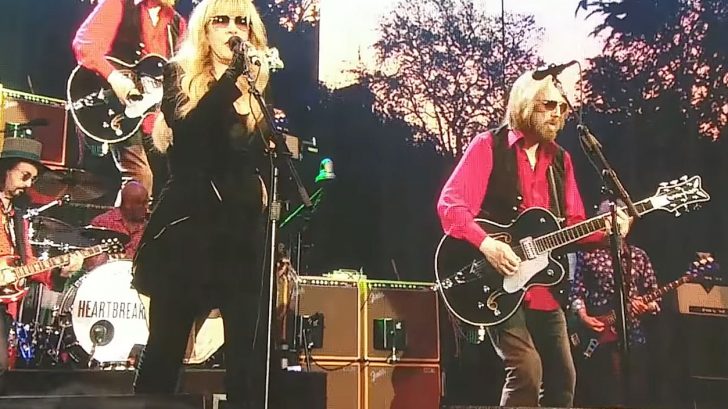 Pair United For The Last Time At Hyde Park Festival

Rock legend Tom Petty passed away last year at the age of 66, leaving behind family and scores of fans and friends struggling with the painful new reality that is life without him. Among those mourning Petty’s sudden passing is his longtime friend and collaborator Stevie Nicks, whose friendship with the late singer-songwriter stretches back to 1978 and the very beginning of what would prove to be a fruitful, fiercely creative time for the pair.

In 1981, Petty and Nicks created their first duet together – the angsty “Stop Draggin’ My Heart Around” from Nicks’ debut solo album Bella Donna, the only track on the album that was neither written or co-written by Nicks; they’d perform it together several times throughout the next three decades, but in a sad twist of fate, July 11th, 2017 marked the last time Stevie Nicks would ever perform alongside her friend.

A native of Gainesville, Florida, Tom Petty overcame a childhood riddled with abuse at the hands of his father to launch a musical legacy that began with Florida based band Mudcrutch. It was ultimately his decision to head west to Los Angeles that resulted in  the musical opportunity that would further shape his legacy as one of rock’s most celebrated figures: the Heartbreakers, for whom Petty served as lead singer and guitarist until his death.

Beyond a musical legacy that includes songs like “Free Fallin’” and “American Girl,”  a spot in the Rock and Roll Hall of Fame, three Grammy wins and another 18 nominations, Petty leaves behind a loving family that includes wife Dana York, two daughters, and a stepson.

As tributes roll in, here’s what the rock world is saying about Tom Petty today:

I am shocked and saddened to hear about Tom Petty, a dear friend and a great musician. It was wonderful touring with him this summer. My love and thoughts are with his family and all who loved him. He will be sorely missed.

.@TomPetty and me go way back. He was a fantastic artist. He will be missed personally and professionally. Loved you Tom.
E$ pic.twitter.com/5gfa2LKCC6

Down here on E Street, we’re devastated and heartbroken over the death of Tom Petty. Our hearts go out to his family and bandmates.

Dear Tom, so sad to hear of his passing. What a lovely, intelligent and talented man he was. Love to his family. pic.twitter.com/9zZaQUMtBs

Thank you Tom for such great music and great shows. R.I.P. brother. https://t.co/Kh3USR1s68

Appearing before elated crowds in Hyde Park, London, Petty and Nicks delivered a performance for the ages – orbiting in and out of each other’s orbit the way only close friends and collaborators are able, Nicks shouting out at one point during the performance “You know that Tom Petty is my favorite rock star!” and swearing to remember the night for the rest of her life as Petty looked on, grinning from behind his aviator sunglasses.

Though the outpouring of grief from the rock community over Tom Petty’s death has been non-stop, Stevie Nicks has understandably been silent in the hours since the news was officially confirmed by longtime Heartbreakers manager Tony Dimitriades; our hearts are with her during this devastating time, and we hope that like us, she’s comforted by the knowledge that some of Tom’s best moments were spent doing what he loved with the people he loved.