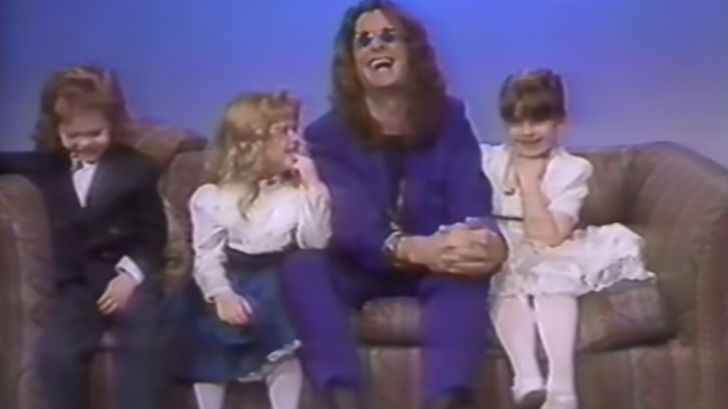 Fed Up With Being A Telephone Father

Ozzy Osbourne was interviewed on The Joan Rivers Show  in 1991, via satellite. He was joined by his kids Amy (7) , Kelly (6) , and Jack (5). The Osbournes really are the most charming rock and roll family. He shatters the “minister of mayhem” image that just about everyone assumes to be his real life persona. Ozzy is an obviously affectionate father, just as much as any dad trying to keep 3 young kids to sit still on international television.

Television host, Joan Rivers, has invited the British Osbournes on her show for an American Father’s Day special. Her following questions are focused on testing his “dad know-how” knowledge. Ozzy is a class act and definitely sets the records straight for anyone who’s doubted him.

When Daddy Comes Home From Touring

“What’s a typical day like when daddy is home,” Joan asks the kids, “Does he get up in the morning with you and drive you to school?” Jack shouts, “No he doesn’t! He doesn’t even have a driver’s license!” Ozzy bursts into laughter at the candidacy of his children. Ozzy says he sometimes goes 6 months without seeing the children and that he’s tired of being “a telephone father.”

“I can’t understand why people can’t accept the fact that I’m an artist/ entertainer. It’s like a clown that works in a circus. Do you see him walking around the street with his red nose and makeup on? I’m just an entertainer it’s what I do for a living,” says Ozzy about the assumptions people make about his metal image.

“Sit up,” Ozzy tells Kelly as she lounges back on the couch. In this moment, it’s evident how reflexive and present Ozzy is as a father. He’s just like any other dad- simple as that. Just so happens that the Osbourne’s father is one of the most recognizable faces on Earth.