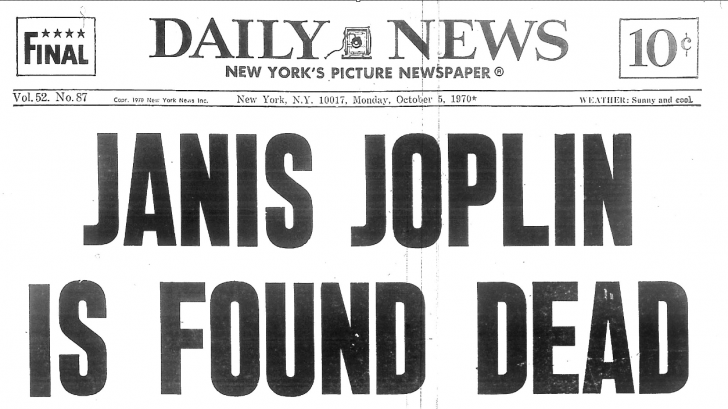 The End Of Rock’s Biggest Voice

We’ve often talked about the unfairness that comes with being gifted with a once in a lifetime artist or entertainer and having them cruelly snatched away from us. It’s the most frustrating damn thing to love them fiercely while they’re here and speculate on the greatness they’re slated to achieve and then wake up one day, as we did on the morning of October 4, 1970, to discover that all of our hopes and dreams are gone like a thief in the night.

Janis Joplin’s death in room 105 of the Landmark Motor Hotel came as a shock to her fans and friends around the world; after all, she was only 27 and with the release of her album Pearl on the horizon, had everything in the world to look forward to – hell, she was even talking marriage and white picket fences.

How could she possibly be dead?

The night before her death was as normal as a night in the life of Janis Joplin got. She’d spent the day at Sunset Sound Recorders to check on the progress of Pearl, listening to Nick Gravenites’ “Buried Alive In The Blues” and made plans to stop by the following day to record vocals for the song before scoring $50 worth of heroin and heading off to Barney’s Beanery with bandmate Ken Pearson for drinks.

After dropping Pearson off, Janis headed back to the Landmark Motor Hotel at about 1am where she shot up, walked to the lobby to buy a pack of Marlboros, and headed back to room 105 where she collapsed between her bed and night table.

And just like that, one of rock’s biggest voices and brightest stars was gone.

After 48 years, there isn’t a rock figure alive who has captivated the world on the level that Janis Joplin did during the course of her relatively short career. A heady brew of rock, blues, and a whole lot of soul, Janis set the bar impossibly high for singers to follow and while many have tried to meet or exceed that bar, all have paled in comparison to the wild eyed girl from Port Arthur, Texas with the devastating voice and a story to tell.