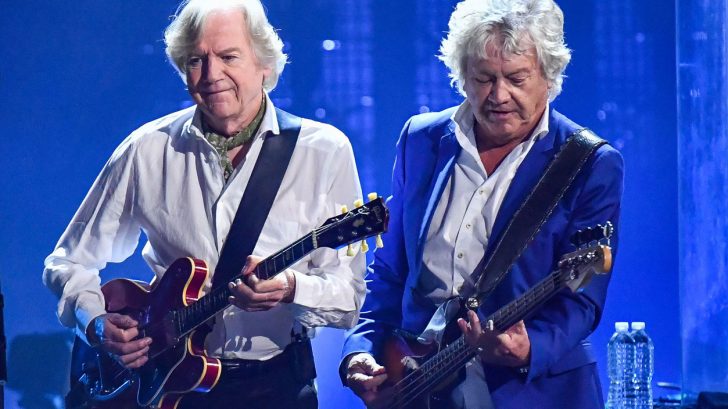 Fans of British rock legends Moody Blues can finally breathe a sigh of relief. After decades of waiting, hoping, wishing and wondering, The Moody Blues finally took their rightful place in the Rock and Roll Hall of Fame on Saturday night, a moment that found one of rock’s most deserving bands getting their moment in the sun after more than 5 decades on the world stage.

If you thought it was good to say and write “Rock and Roll Hall of Famers, The Moody Blues,” we’re pleased to report that actually getting to see it all up close and personal feels – and sounds – even better, as proven by the band’s performance at Saturday night’s induction ceremony. Inducted by Heart’s Ann Wilson after a glowing speech that hailed the songwriting skills of Justin Hayward as the standard for Wilson’s own songwriting, The Moody Blues celebrated their big moment in the only way possible: with an electrifying performance of “Nights In White Satin” from their landmark 1967 album Days of Future Passed.

Written by Moody Blues frontman Justin Hayward at age 19 after being gifted with a set of white satin sheets by a girlfriend, “Nights In White Satin” remains The Moody Blues’ most enduring song to date, aging like a fine wine and further cementing the band’s place in music history. It’s only right that it should play a starring role in the biggest night of The Moody Blues’ career, and if you thought it sounded spectacular the first time around, you’re in for a treat!

Be sure to check out this incredible performance in the video below; we can’t think of a better way to celebrate this momentous occasion than to relive the moment as it happened!