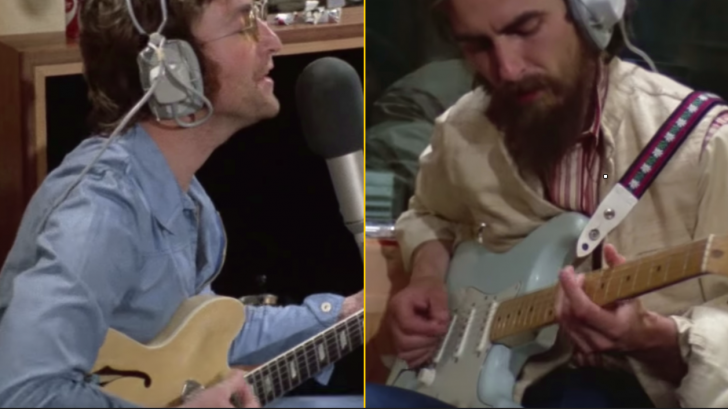 Watch It While You Can!

It has been almost 17 years since George Harrison passed away, and 37 years since John Lennon was tragically killed, but not a day goes by that we don’t miss these two legendary Beatles. It simply goes without saying that both men have written some of the most timeless and cherished music in history, and even all of these years after their passing, their music remains such a prominent part of our lives.

It was the week of May 1971, just a short year after The Beatles had broken up, John Lennon enlisted the guitar playing talents of George Harrison for a brand-new (at the time) song called “How Do You Sleep?”. It is a timeless song, but up until just now we never got to see its recording session take place, but just a few days ago, footage of this session had just surfaced, and we can now finally go back in time and be a fly on the wall for when this song was recorded.

This recording session took place in Lennon’s home studio, Tittenhurst Park in Ascot, England. Despite no longer being with The Beatles, both John and George still knew how to capture the magic that band had and channel into a brand-new song that was recorded live with every instrument playing all at once.

All in all, it’s a simple formula. You get the songwriting skills of John Lennon and combine it with the magical guitar playing of George Harrison and you’ve got a recipe for success. Now, watch this never before seen piece of footage from this timeless recording session!