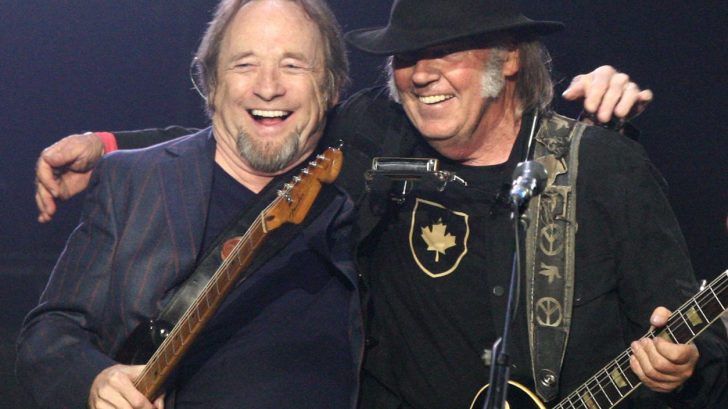 Stills, Young Reunite For Light Up the Blues Event In LA

Well, well, well! April sure seems to be shaping up to be a month of reunions – first Richie Sambora and Bon Jovi at last weekend’s Rock and Roll Hall of Fame Induction Ceremony, and now 2/4 of Crosby, Stills, Nash and Young.

Neil Young reunited with former CSNY bandmate Stephen Stills over the weekend at Stills’ 5th annual Light Up the Blues benefit concert in Los Angeles, surprising fans when he stood up from his piano after performing his song “Birds” and announced that he wanted to “bring his brother on stage”. Stills appeared moments later to the crowd’s great delight, joining Young for a duet of  “Long May You Run,” “For What It’s Worth” and “Mr Soul” before punk legend Patti Smith appeared for a rousing rendition of “People Have the Power”.

This isn’t the first time CSNY’s spirit came to the forefront for Light Up the Blues.

Young, appearing for the third time, previously performed at Light Up the Blues in 2015 and 2016. Before that, though, Crosby, Stills, and Nash appeared at the event for two years running in 2013 and 2014. Now in its 5th year, Light Up the Blues began in 2013 as a result of Stephen Stills and his wife, Kristen, recounting their experiences as parents of a child with autism.

“With the help of steadfast friends and concerned professionals that shared our determination, Kristen and I battled through conflicting diagnoses, emerging information and trial-and-error, and were able to find a path that lead our boy to a far better way of life,” he said. “And now he’s in college.”

Two legends getting together for a night of fun, music, and autism awareness? We’ll take it! Light Up the Blues will return in 2019 and who knows – maybe we’ll even get that CSNY reunion we’ve been hoping for.