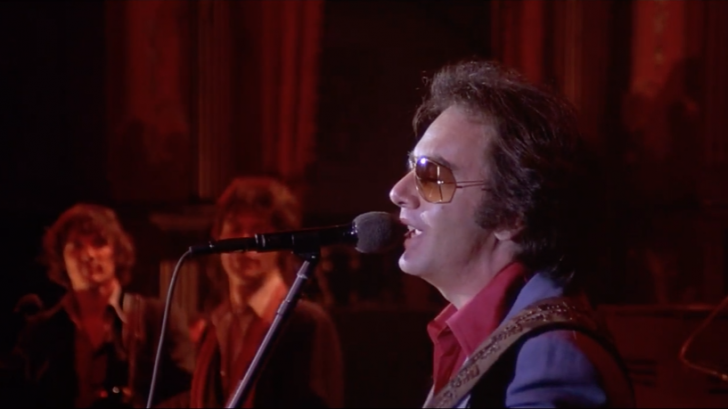 What Was He Doing There?

Neil Diamond can belt out a tune. No doubt. Yet, The Band’s heavy hitter farewell concert of 1976 was not Diamond’s scene. He was definitely a little bit ostracized by the rest of the musicians in attendance at The Last Waltz. Neil Young, Bob Dylan, Joni Mitchell, Eric Clapton, and Ringo Starr (just to name a few), were the cool kids of the night.

The Band’s guitarist, Robbie Robertson, had just produced Neil Diamond’s Beautiful Noise album. The record was fourth in succession of six straight Top 5 Billboard hits for Diamond. Robertson admired the solo artist as a songwriter and performer and invited him to be a part of the show.

Levon Helm, The Band’s drummer and lead vocalist had reservations prior to Neil taking the stage. He stated in his autobiography, This Wheel’s On Fire, “When I heard that Neil Diamond was going to play, I asked, ‘What the hell does Neil Diamond have to do with us?'”

Most musicians at The Last Waltz had their own sets but Neil Diamond had one song to utilize. Joni Mitchell performed 3 songs before him and Bob Dylan was set to perform after him. His insecurities showed a little bit when he addressed the crowd.

“I’m only gonna do one song but I’m gonna do it good,” Diamond told the audience.

Neil Diamond performed “Dry Your Eyes.” He stole the whole dang show. Talk about underdog! This was the first and only time he ever performed the song. Diamond and Robbie Robertson had written the song about the period after the multiple assassinations in the 1960s.

Robertson has stated on the liner notes of The Last Waltz, “Neil Diamond bridged that world. When I worked with him on his record, people said, ‘Is this a put-on?’ No, it wasn’t. This guy is really good at what he does and comes from this tradition of songwriting.” We can all agree with Robbie Robertson on that one.