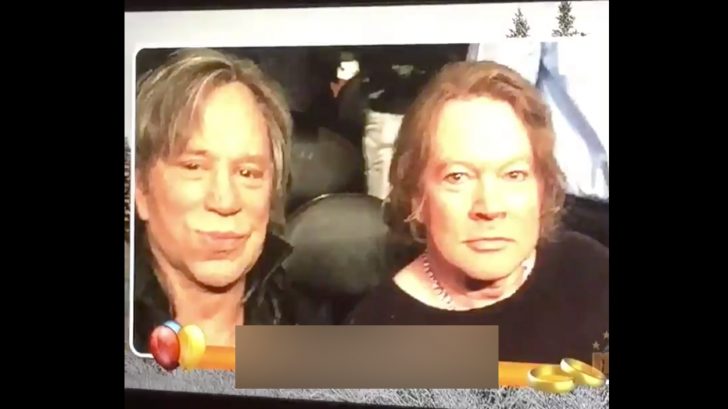 News stations, even your local ones, seem as if they’re all comprised of consummate professionals, right? Well, they are, usually. That being said, that doesn’t mean that they can’t make mistakes every now and then.

The sad thing is, when it happens, everyone makes an unnecessarily big deal about it. That being said, it’s kinda hard to just let this one slide, and once you see the blooper, you’ll see why, because there’s no way that any true classic rock fan would make this mistake.

Just a few days ago, a local news station dedicated a segment to showcasing couples who were celebrating birthdays and/or anniversaries. When it came time to showcase a would be ‘Max and Geraldine Bailey’, this news station mistakenly used a photo of Guns N’ Roses frontman Axl Rose sitting next to legendary actor Mickey Rourke that was taken during a boxing match a month ago.

This hilarious moment was captured by Katlyn (@KatlynNoelle88) on Twitter who posed the question “WHO DID THIS?!?!”, a question that we are ALL asking right now…

Now, I’m almost certain that Axl will just laugh this off, but I’m REALLY interested to see how Mickey Rourke responds to this. We’re not sure exactly which news station made this iconic blooper, but time will tell as I’m sure they will make a retraction of some sorts.