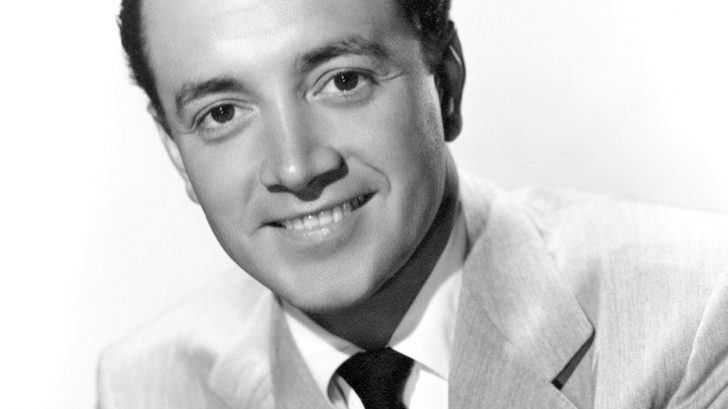 He was one of the last surviving voices of America’s golden age of music, and earned the highest of praise from Frank Sinatra when he was called “the best set of pipes in the business”. Legendary in every sense of the word, American crooner Vic Damone is dead at the age of 89, the news confirmed by the late singer’s family as having occurred yesterday at Mount Sinai Medical Center in Miami Beach, Florida, surrounded by loved ones.

Best known for American standards such as “You’re Breaking My Heart, “On the Street Where You Live” (from My Fair Lady), and “My Heart Cries for You,” Damone was born Vito Rocco Farinola in 1928, the son of Italian immigrants from Bari, Italy. His youth was shortlived after an injury forced his father out of work and a then 14-year-old Vic to drop out of high school and take a job at Manhattan’s Paramount Theater as an usher, but it was ultimately this twist of fate that gave the teen his big break. Damone ran into Perry Como on an elevator and, thinking quickly, stopped the elevator between floors and began to sing; after asking whether he should take voice lessons, and impressed Como replied “Keep singing!” and referred Vic to a local bandleader. It was then that Vito Farinola became Vic Damone, using his mother’s maiden name.

Legendary crooner Vic Damone passed away on Sunday at the age of 89. I still play some of his 78s from the 40s. He was simply one of the best! You'll be missed Vic! pic.twitter.com/Gl05D2P6p6

I cry like a baby every time one of my idols leaves us, & today’s no exception. An incredible singer, Vito Rocco Farinola, (Vic Damone) was also a super gracious, lovely man, and a good friend of my dads. I mention him whenever I sing this https://t.co/kzRRRgvnqP #Oneofakind pic.twitter.com/z6TMwsNqjM

An Army veteran who served a two-year stint in Germany during the Korean War, Vic Damone worked his way up the New York club circuit before becoming a breakout star, dominating the charts in 1949 with the release of “You’re Breaking My Heart” and later going on to amass several Top 10 hits with “My Heart Cries for You” and “Tzena Tzena Tzena”. It’s been reported that at the time of his death, Damone had over 2,500 recordings to his name and a legacy that included guest spots on The Dick Van Dyke Show, Judy Garland’s prime time series, and his own Vic Damone Show from 1956-1957.

Just found out that Vic Damone passed away yesterday. He was 89. I loved him. He was such a talented singer. He didn’t do many films, but I loved him in HIT THE DECK (1955). #RIP ? pic.twitter.com/BpEEaBvLui

Singer Vic Damone (1928-2018) has passed away at the age of 89 ????. He is pictured here with his first wife Pier Angeli (1932-1971), with whom he ultimately had a contentious divorce, and their son Perry (1955-2014), who lost a brave battle with lymphoma 4 years ago ????. Married 5 times, his 3rd wife was beautiful actress Diahann Carroll (1935- ) and his last wife passed away in 2016. Damone was a great singer, with several hits including his own version of the “My Fair Lady” song “On the Street Where You Live”, which was a top 10 hit for him in 1956. He also sang the themes to many popular films including “An Affair to Remember” (1957). He leaves behind 3 surviving daughters and several grandchildren. May he RIP ????. #vicdamone #rip #classicsinger #vintagesinger #oldhollywood #classichollywood #hollywoodmarriage #pierangeli #hollywoodfamily #perrydamone

Preceded in death by wife Rena Rowan and son Perry Damone from his marriage to late starlet Pier Angeli, Vic Damone is survived by daughters Victoria, Andrea and Daniella in addition to grandchildren Tate, Paige, Sloane, Rocco, Daniella, Grant. He will be missed!