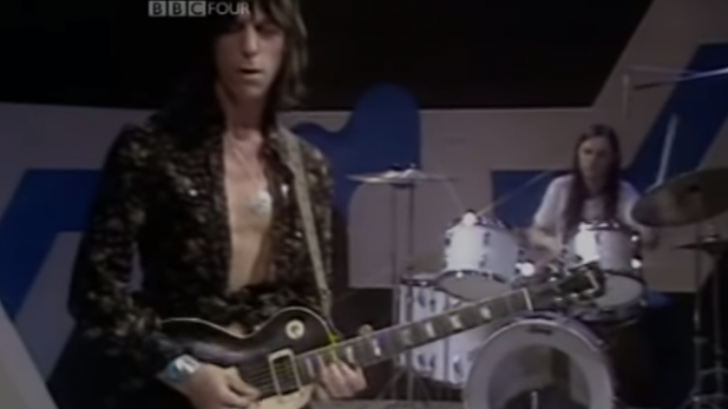 Jeff Beck had just released his third solo album, Wired, in 1974 and was dabbling in some of his most creative work. He also had some gigs producing and playing guitar on Upp’s LP, This Way Upp. The jazz-rock fused band from Britain was a great fit for Beck, who had already been working heavily with jazz music. The legendary guitarist was completely in his element with Upp. He performed on tracks like “Down in The Dirt,” “Dance Your Troubles Away,” and “Don’t Want Nothing to Change.”

Jeff Beck’s work with Upp was recorded for BBC’s Guitar Heroes special in 1974.

The iconic guitarist is known for his quirky creativity, yet always seems to be technically adroit when he plays. He closes his eyes during some of the most progressive solos and never exactly goes into any “incoherent blazing,” as he would call it. It’s probably his level of mastery that doesn’t allow for any sort of messy guitar work- but we wouldn’t mind that from him either. Beck is happiest when he’s just being Jeff Beck and playing blues/ jazz lined music. He definitely was in the best environment to do that with Upp’s lengthy instrumental productions.

Typically Beck would play with a Strat but for his studio production for the BBC he used a 1954 Oxblood-finish Les Paul. He had bought it in Memphis, Tennessee. The guitar had been customized for a previous customer who rejected the final product. After Beck bought the guitar, Gibson re-issued 150 “detail precise” instruments just like his.