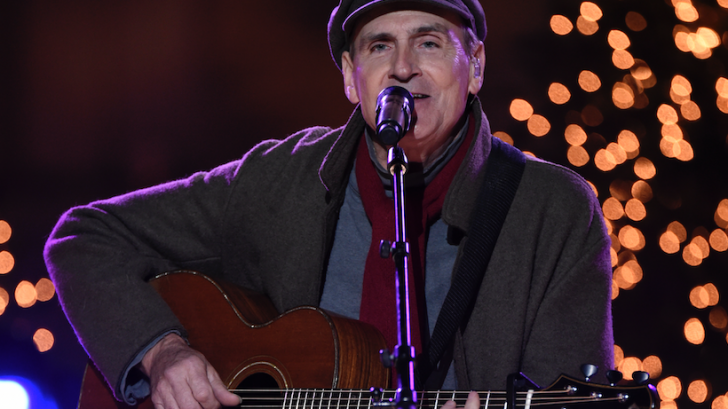 So it goes, that James Taylor and his Cuban Percussionist, Luis Conte, got lost following a truck. The pair were driving through the Montreal Jazz festival in 2015 when they encountered a flat bread. The truck’s bed was lined with musicians playing Afro-Cuban jams. Taylor was completely enthused by the sight and followed the truck for about 10 blocks. He also says, “But Luis, I spoke to him the next day, we were playing a gig, and he said, ‘No man, I ended up 10 miles out of town. I just followed it all night long.'” Nothing compares to live, improvised music. The sounds come from a real place of passion.

“SnowTime” was originally performed at the Molson Canadian Amphitheater in 2014. Taylor  included the song on his 2015 album, ‘Before This World’. The Latin inspired song wasn’t necessarily intended to be a Christmas song, but it certainly is holiday appropriate. The singer’s experience at the jazz festival with Luis Conte stuck with him.

“The thing that was amazing was to see his connection to the music because it was authentic, true Afro-Cuban stuff,” says Taylor about witnessing the musicians play their music on the fly. “And the idea was the frozen man, which is one of my ways of thinking of myself, gets thawed out by this process, it sort of takes him by surprise, sort of wandering in downtown Toronto, he sort of comes across this flatbed truck, basically cooking it (musically) on the street.”

James Taylor was hosted by The Rockefeller Center in New York for their 2015 83rd annual tree lighting festival. His soothing voice was so heart warming in the cold December. As he played his guitar the lights around him lit up the stage with a candle-lit effect. It was truly a spectacularly touching performance of “SnowTime.”

My first impression, some kind of procession
Pulling on a long line of fancy dancers
A band stuck up on a flatbed truck
They were raising a ruckus swinging for the fences