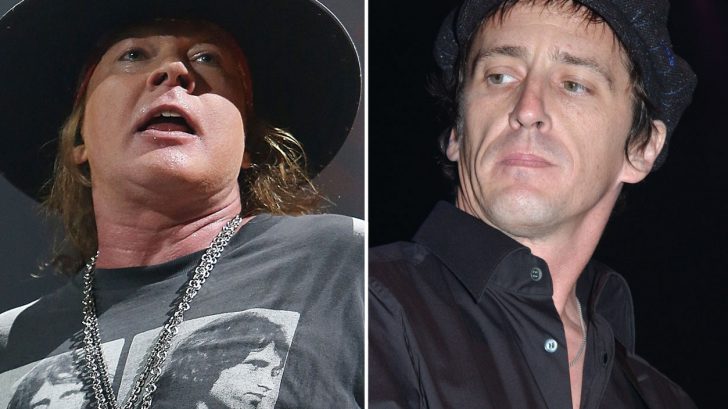 If, like us, you were part of the “Where’s Izzy?” camp when it came to Guns N’ Roses’ highly anticipated reunion tour, don’t worry: the man himself just set the record straight once and for all.

In Axl Rose and Duff McKagan’s first public interview since news of the band’s reunion, Axl attempted to sum up Stradlin’s absence by saying, “I don’t really know what to say about Izzy. It’s like you could have a conversation and think it’s one way and the next day it’s another way; and I’m not trying to take any shots at Izzy. It’s just his thing is kind of his thing, whatever that is.”

Stradlin shot back, calling shenanigans on any other explanation than that Axl, Duff and Slash “didn’t want to split the loot equally”.

Then, earlier this year there was the revelation from former Guns N’ Roses manager Alan Niven that not only was Izzy initially on board to join the reunion, but he actually made it as far as a soundcheck with the band before leaving abruptly, never to return.

Now, Izzy Stradlin is setting the record straight once and for all, offering up his first ever statement regarding his absence from Guns N’ Roses’ reunion.

In an interview with the Wall Street Journal, the 56-year-old rocker says:

“The current GN’R tour has been a great success for the guys,” Stradlin said. “My non-participation was simply not being able to reach a happy middle ground through the negotiation process. That’s life. Sometimes things don’t work out.”

Sometimes things just don’t work out. Pretty simple when you think about it, and kind of gives us the feeling that there’s no bad blood between Izzy and his former bandmates. Things just…are what they are, and everyone is okay with that.

A behind the scenes look into the #GnFnR #NotInThisLifetime Tour…

Guns N’ Roses are currently the busiest band in the biz, their critically acclaimed Not in This Lifetime… tour picking up in Europe next Monday, with dates confirmed across the world until November 25 and never ending rumors of a possible album to come.

Stay tuned to Society of Rock for the latest in Guns N’ Roses news, tour dates, and announcements!