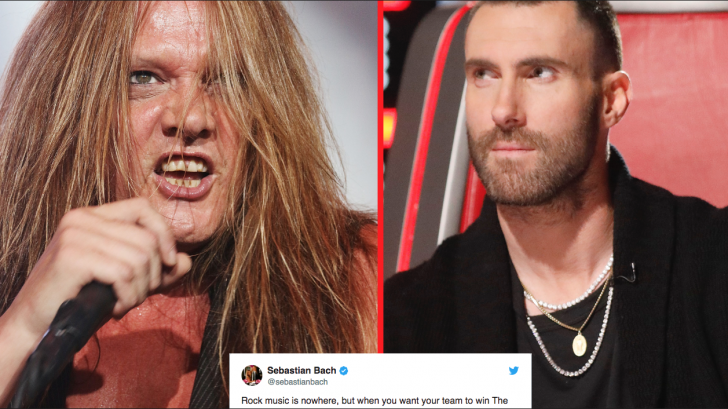 Bach Sounds Off On Recent Comments

Another rocker has reacted to Voice judge Adam Levine’s recent comments on the state of rock music.

Last week, Voice judge and Maroon 5 frontman Adam Levine sounded off on the state of rock music, commenting that ‘rock music is nowhere’ and that hip hop is “better than everything else”. Naturally, this drew criticism from the rock community, with Slipknot frontman Corey Taylor angrily leading the charge and suggesting Levine “go back to the f—— Voice”.

“Rock music is nowhere, really. I don’t know where it is. If it’s around, no one’s invited me to the party. All the of the innovation and incredible things happening in music are in Hip-Hop.” — @adamlevine (via @Variety) pic.twitter.com/42n18Abib3

Just because you claim to have ‘Moves Like Jagger’ doesn’t mean you come anywhere CLOSE to ROCKING like Jagger. Tell that schmuck to go back to The fucking ‘Voice’ ?? https://t.co/tFm0VHvV82

Now, rock’s elder statesmen are weighing in. Twisted Sister frontman Dee Snider tried to appeal to Levine’s inner rock fan and early days jamming “I Wanna Rock,” but called the 39-year-old singer “out of touch” for his views on the current state of rock music.

Hey @adamlevine remember when you were young & went to clubs & small venues & stuff? 😉 That scene is alive & well & you would be STUNNED by the talent & passion that is out there! You told me the 1st song you sang that set you on your path was "I Wanna Rock", right? #NeverForget https://t.co/fcDxZMhQFd

Oh no @adamlevine…why did you have to go and say that? You are REALLY out of touch! https://t.co/epKNEgyrKO

But it was former Skid Row singer Sebastian Bach that had the last word.

The 50-year-old rocker was quick to offer his take on Levine’s comments, making his point in two short, but sweet sentences – “Rock music is nowhere, but when you want your team to win The Voice, you choose the song “I Remember You”,” wrote Bach, referencing a 2013 performance in which Voice contestant Amber Carrington sang the 1989 Skid Row classic. “You’re welcome.”

Rock music is nowhere, but when you want your team to win The Voice, you choose the song "I Remember You". You're welcome. https://t.co/fP9ZOzzRMe

Sure, Sebastian could have gone the nasty route and really let Adam Levine have it – but there’s so much more power in his quiet reminder of rock’s roots and who’s really responsible for rock music’s past, present, and future.

Rock music is still here, it’s not going anywhere, and the same songs that those reality show contestants sing night after night are the same ones inspiring the bands of today to get out there and keep the tradition going.