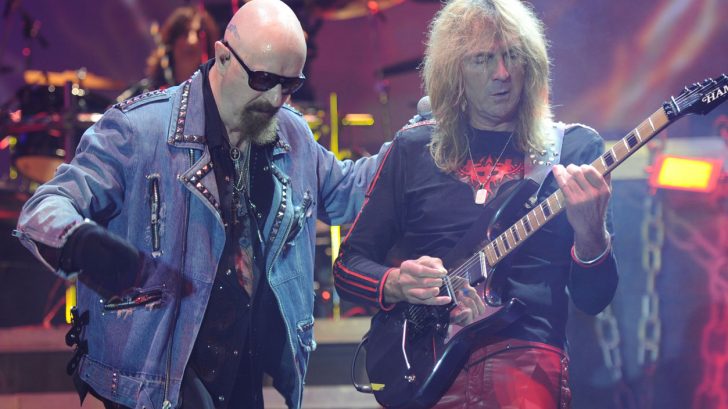 “There Wasn’t A Dry Eye In The Control Room,” Reveal Tipton’s Bandmates

It’s been a whirlwind of a week for British metal titans Judas Priest, as guitarist Glenn Tipton announced earlier this week that his 10-year battle with Parkinson’s was forcing him to stop touring. Both he and frontman Rob Halford stressed that this isn’t the end of his career with Judas Priest – not by a long shot – and that fans can expect to see Tipton in one off performances with the band as and when his condition allows.

For now, though, Glenn will be replaced on the road by Andy Sneap, co-producer of Judas Priest’s upcoming album Firepower – a decision that Halford and bassist Ian Hill say came last Thursday and was “the bravest decision anybody will ever make”.

The trouble began four years ago during preparations for Judas Priest’s Redeemer Of Souls tour; “When he started then, he was shaky, but, as we went through, he was getting better every day,” shares Hill, adding “At the end of the second week, he was ready to go. He put in a superb performance on the last tour, and we were all hoping that was going to happen again.” However, that wasn’t to be. Hill revealed that in the middle of rehearsals last week for the upcoming Firepower tour, Glenn “had to admit it.”

“We were all hearing this and we were living it with him. We felt every note. He came in and he made the bravest decision anybody will ever make, saying, ‘I can’t do it any more.’ There wasn’t a dry eye in the control room where we were sitting at the time.”

The most frustrating part of Glenn’s inability to tour with Judas Priest anymore is the fact that this wasn’t the work of a silly accident or self-destructive behavior – it’s literally his body working against him. Despite this, though, his bandmates remain hopeful that modern medicine will be able to give him back his favorite part of his career, at least to some degree.

“Strides are being made in medical science all the time, so we’re all hoping and praying that somewhere along the line somebody comes up with something that at least controls his symptoms if nothing else, so he can get out and at least play through a few songs with us on stage.”