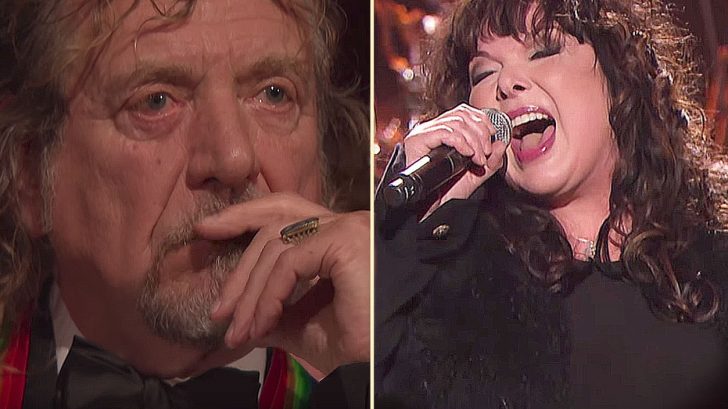 Bands have different benchmarks for when they know they’ve ‘made it’: some consider a fat royalty check ‘making it,’ while for other bands it’s top billing at a major festival. In the case of 70s rock icons Heart, their defining moment came in 2012 when they were tapped to perform at that year’s Kennedy Center Honors, and reduced Led Zeppelin’s Robert Plant to tears with their cover of“Stairway To Heaven”.

Led Zeppelin, in attendance that evening as one of the winners of the prestigious Kennedy Center Honor, sat transfixed as Heart’s Ann Wilson took the stage with her sister Nancy on acoustic guitar, Jason Bonham on drums and a host of backup singers, recreating the mystery and magic of “Stairway To Heaven” in a manner so flawless that the footage you’re about to see actually went viral shortly after its debut on the internet, amassing several million hits within days.

The most powerful part of Heart’s show stopping performance came when the camera eventually panned to Robert Plant, who was unable to do anything but cry as he listened to his greatest masterpiece be sung back to him in celebration of a life spent dazzling the masses and giving people something to believe in, even if it was only rock and roll. It’s an amazing thing to be recognized for your contributions to the world, but I would imagine that it’s a far, far greater thing to see your life come full circle in such a gorgeous way!