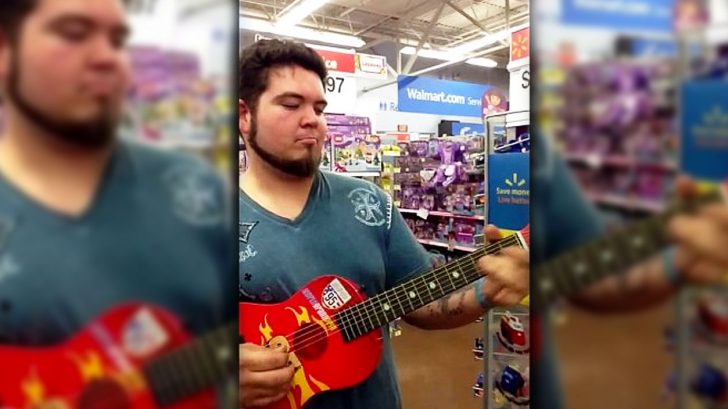 Walmart Rockstars Jam At 3am!

Why doesn’t this ever happen when I’m in Walmart?! Late night rockers Clay Shelburn and Zac Stokes took to Walmart at 3am and when Clay picked up a miniature Cars themed guitar, no one expected an actual song, much less something of this caliber.

We’re sure these two never expected their impromptu jam sesh to get over 7 million views, but honestly – Clay’s guitar playing and vocals are amazing, how could they not generate a huge buzz?

Clay Shelburn is an accomplished singer, songwriter, and guitarist out of Fort Worth, Texas. When he’s not jamming at Walmart with friends, you can find him performing an acoustic or full band set in his hometown.

What a treat – Clay is a phenomenal musician, and the fact that he was able to translate this Stevie Ray Vaughan classic to a toy guitar and back to a regular one seamlessly should definitely tell you something about how talented he is!

We can’t get enough of this late night jam session, and after giving it a watch or two we know you’ll feel the same!