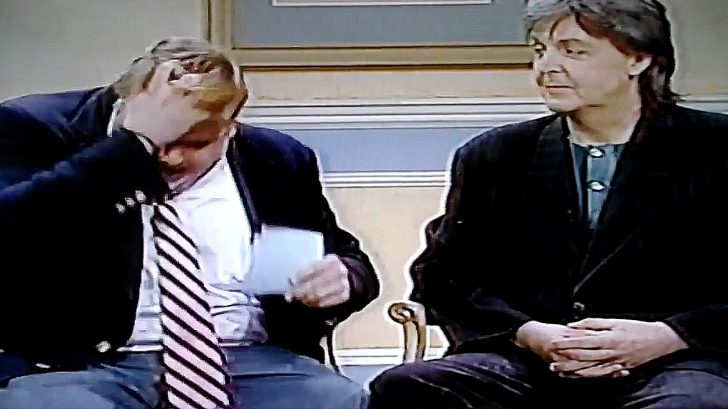 It Doesn’t Get Funnier – Or More Awkward – Than This

I don’t care how awkward you think you are; you will never in your natural life be as awkward as Chris Farley was that time he interviewed Paul McCartney during a Saturday Night Live sketch and frankly, I don’t want anyone to ever try. That’s the magic that was Farley, a comedian completely unafraid to poke fun at himself for the sake of an audience visibly enjoying itself.

Of course, it wasn’t actually Chris Farley being deliciously awkward while speaking to Paul McCartney, but Farley parodying himself on his own SNL sketch The Chris Farley Show, a bit that featured the comedian interviewing different celebrities and becoming hilariously more and more flustered as he realizes that he’s asking completely absurd or irrelevant questions and embarrassing himself as a result.

He’s rocking stages all over the world well into his seventies, but if you believe what you hear, Sir Paul McCartney has actually been dead since 1966 as per a decades long conspiracy theory that finds The Beatles replacing the real Macca with a lookalike named Billy Campbell.

One of rock’s most amusing – and a little creepy, let’s be real here – theories, the “Paul Is Dead” campaign says that the real Paul McCartney was actually killed in a car crash in 1966, but the Beatles kept it secret, replacing him with Billy Campbell, the winner of a Paul look-alike contest.

With hundreds of thousands of “clues” provided by fanatics that supposedly prove this theory true including the famed Abbey Road photograph, it’s no wonder Paul has been mum on the entire thing for the better part of half a century.

McCartney appeared on the third and final Chris Farley Show sketch on February 13, 1993 and rendered Farley’s caricature awestruck and awkward, deadpanning as Farley asked if he remembered being in The Beatles and even brought up the famed “Paul Is Dead” campaign (“That was a hoax, right?”). Rest assured though, it’s not all cheek flushing and angry smacks to the side of the head for Farley; the sketch ends with the realization that yes – Paul McCartney really is every bit as cool as you thought he was growing up.