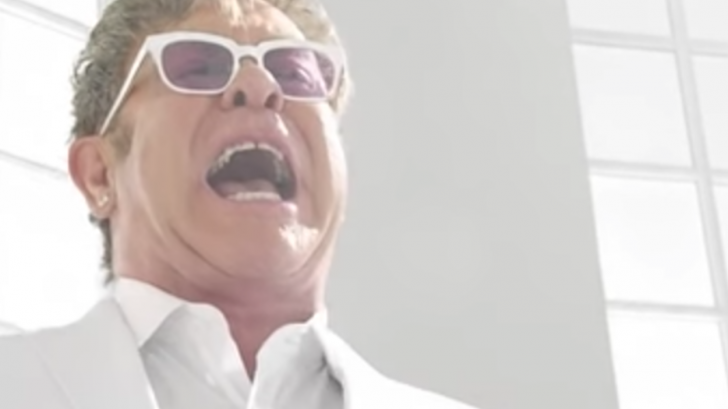 Elton To The Rescue

Elton John is a busy man, but somewhere in between an ambitious three year farewell tour, raising two kids under the age of 10 and donating his time and talent to various charities around the world, he found time to drop by and hang out with the guys in Fall Out Boy.

John, 71, was tapped to sing on Fall Out Boy’s 2013 studio album Save Rock and Roll where he joined the pop-punk veterans for the album’s title track. But in true Elton John fashion, he couldn’t just sing on the track and call it a day; he also appeared in the official music video for “Save Rock and Roll,” adding the weight of his influence to a 21st century love song to all things rock and roll.

Elton’s role in the video for “Save Rock and Roll” is exactly what you’d expect it to be.

Decked out in white and arming Fall Out Boy with brand new instruments to aid in their fight to protect rock music and those who believe in it like they’ve never believed in anything else, Elton John represents the old guard of rock; a generation that’s getting ready to step aside and let the kids take over, but recognize that it’s their legacies, their influence that give the next generation the courage and drive to keep things going long after they’re gone.

While the video, part of Fall Out Boy’s Young Blood Chronicles (an 11-part film comprised of music videos produced by the band), deals with the forces of good and evil battling for the very heart and soul of rock and roll, “Save Rock and Roll” itself is an anthem – one that celebrates that same heart and soul, the beauty and the rebellion and lifesaving nature of rock music that gave so many of us a place to call home when the world seemed too big, too crazy, too scary.

And after all, isn’t that what matters when everything is said and done?