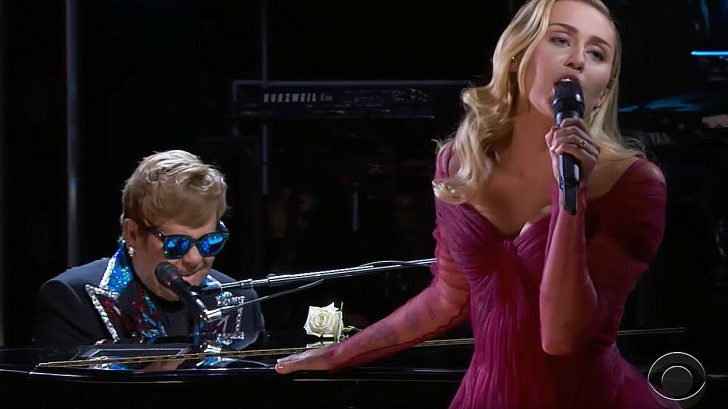 For as many things went wrong at last year’s Grammy Awards, this year’s show made up for it in spades with a show that folks are sure to be talking about for weeks to come. Last night’s Grammy Awards promised glitz, glam, stunning upsets and performances for the ages and didn’t disappoint, giving fans one of the most memorable, highly anticipated moments of the night when Sir Elton John hit the stage with Voice judge Miley Cyrus for a duet so stunning, we’re still fighting off the chills the next morning!

The audience was stunned into silence as John, 70, and Cyrus, 25, crooned their way through John’s 1972 classic “Tiny Dancer,” avoiding the flash and drama that usually goes hand in hand with Grammy night in favor of the quiet grace that comes with knowing that what you’ve done will stand the test of time. Elton kicks things off as only he can, decked out in his signature glitzy suit and sunglasses before the breathtakingly beautiful Miley joins him a few moments later dressed in a soft pink ballgown, two distinct vocal styles coming together to create a version of “Tiny Dancer” that we didn’t know we wanted until it was finally ours.

Judging by the reaction of folks on social media just after the performance wrapped, we’re not the only ones impressed by the quiet power and strength of Elton and Miley’s duet. Fans hailed it as “the highlight of the show,” celebrating Miley’s evolution from Disney starlet into the confident, seasoned entertainer we saw before us last night:

Miley did a fabulous job.

This was truly the high light of the show!

The performance was out of this world! Im so proud of miley! Love you too both! Thank you for calling her

Stunning! ? Everything about you, your talent, your confidence, your natural beauty & incredible dress. Amazing performance @eltonofficial ✨

You looked stunning in that dress and you did that song justice like few could! Your lower register is beautiful.

The lovefest didn’t stop there! Miley took to Twitter to thank Elton for giving her the opportunity and honor of joining him onstage, her long held dream of one day performing with him finally a reality.

Sir Elton John, I can't thank you enough for giving me the honor of performing with you tonight at The Grammys! I've loved every moment I've spent with you over the years & will cherish each second of your kindness.let's kick ass and keep fighting for an end to the AIDS epidemic! pic.twitter.com/ZXG12lZLB7

Elton, currently gearing up for his 300 date Farewell Yellow Brick Road tour slated to begin later this year, responded early this morning, calling their collaboration “a thrill” and hailing the 25-year-old singer-songwriter as a “real singer and artist”.

Such a thrill to perform with @MileyCyrus last night. Great to share the stage with a real singer and artist. She was terrific in every way and looked so gorgeous. I love you dear Miley. Such a beautiful woman and beautiful soul. Ex#GRAMMYs performance: https://t.co/iHYogkN8JA pic.twitter.com/sJquwEDUA1

If last night’s duet at the Grammy Awards isn’t proof that dreams really do come true, I don’t know what is! Relive the magic in the video below and while you’re at it, don’t forget to sound off and let us know how you liked it!