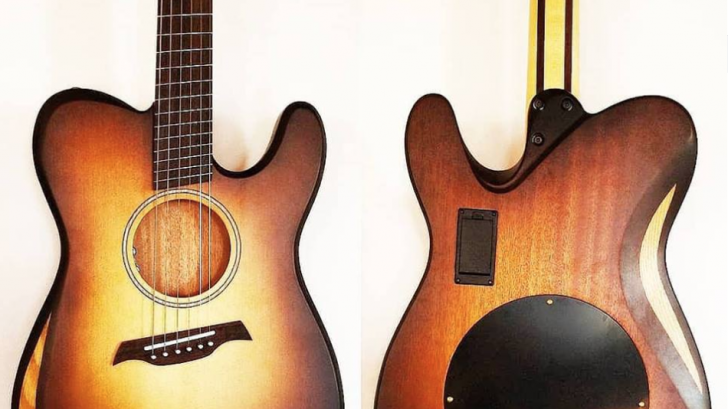 Jay Wenk was a World War II veteran who traveled and fought across Germany to Czechoslovakia, in the combat infantry- as a rifle man. The veteran served on the Woodstock Town Board from 1990- 1993, then again in 2008 until his death in May 2008 at the age of 91. Wenk was also a member of Veterans for Peace and U.S. opposed military action. His time in the military is chronicled in his memoir, “Study War No More: A Jewish Kid From Brooklyn Fights the Nazis.”

Town Clerk Jackie Early speaks of Jay Wenk, “Jay and I came from opposite ends of politics, but we worked through it, and we ended up becoming very, very good friends.” He was respected by everyone in Woodstock, even those who did not agree with his political stance, because his intentions were always positive. His grandson Conor Wenk, is so proud of his grandfather’s legacy in Woodstock that he decided to honor him in the sweetest way!

Conor Wenk of American Son Guitars, says his mission is “To hand make the most sonically pleasing instruments in elegant, yet understated designs.” In 2018, he unveiled the first ever “Grandcaster,” a homage to his beloved and respected WWII Veteran grandad.

“This fanned fret, semi-acoustic T-style sports an X-braced german spruce top I acquired during my time at @santacruzguitar, on a mahogany frame. The oak accents came from my Grandfather, Jay Wenk’s countertop. I’ll post detail shots later today. Full specs will be on the facebook album.”

Conor explains these photos: “Some angled shots of the “Grandcaster”. The intersecting lines in the first shot are my new favorite thing. They remind me of my relationship with my Grandfather, who was the inspiration for this build. @ Woodstock, New York”

Jay Wenk passed away from Hodgkin’s Lymphoma. “It’s something he had a battle with once before, and this time he really didn’t want to fight it,” Conor Wenk explains, “I was incredibly proud of everything he did, and he was absolutely my favorite person.”