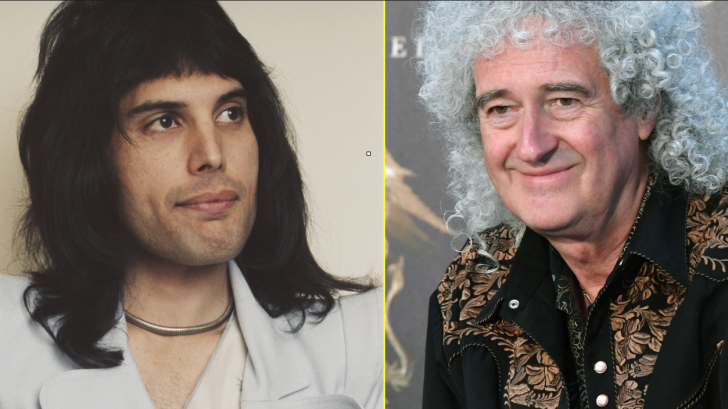 May Talks Freddie Mercury Ahead Of Film Debut

With only days to go until its November 2nd release date, Bohemian Rhapsody’s painful, lengthy journey to the silver screen is almost over. Critics are already hailing Rami Malek for his portrayal of Freddie Mercury and, you didn’t hear it from us, but there’s already Oscar buzz surrounding the 37-year-old actor.

Which only leaves one question: what would Freddie Mercury himself think of Bohemian Rhapsody?

Sadly, he’s not here to watch it and give us his honest take on it. But there’s one man we can trust to speak for him: Brian May.

May, 71, remains one of the most trusted keepers of Freddie Mercury’s life story and has remained a constant presence throughout the writing and filming of Bohemian Rhapsody – so it makes perfect sense that next to Kashmira, Freddie’s sister, and former fiance Mary Austin, he’s comfortable speaking on Freddie’s behalf.

Get ready for #BohemianRhapsody with the official soundtrack featuring Live Aid tracks previously unavailable for streaming and download: https://t.co/WzxNsgbu8X pic.twitter.com/GeWDQ4syO5

He sat down with Classic Rock Magazine this week to talk about the film, and when asked whether he thought Freddie would approve of Bohemian Rhapsody, his answer was…well, about what we expected.

“I think he would have felt it was a fair cop. It shows all his greatness and all his fallibility and insecurity – the whole bit,” May said. “I think it shows him very truthfully and not sycophantically, but in a way that appreciates his talent.”

It couldn’t have been an easy job to capture the magic of someone like Freddie – someone whose declaration that he would be a legend one day turned into a self-fulfilling prophecy. It must have been an even harder job to walk that fine line between sugarcoating his life and legacy and giving fans the unvarnished truth of it all.

But judging by the wide range of emotions that passed through Brian during the “hundreds of times now, in fragments and eventually coming together” he’s seen Bohemian Rhapsody, the cast and crew did a pretty damned good job of finding that sweet spot in telling Freddie’s story.

“It’s very emotional. It’s all about Freddie. Yes, we are in there, but the story is about Freddie and that was always the aim.”

Brian wrapped up his thoughts on Freddie and Bohemian Rhapsody with possibly the truest statement about his old friend that anyone could possibly ever give, saying, “…he was sure was unique. I’ve never met anybody like Freddie in my life, before or since, and it’s probably not going to happen again.”