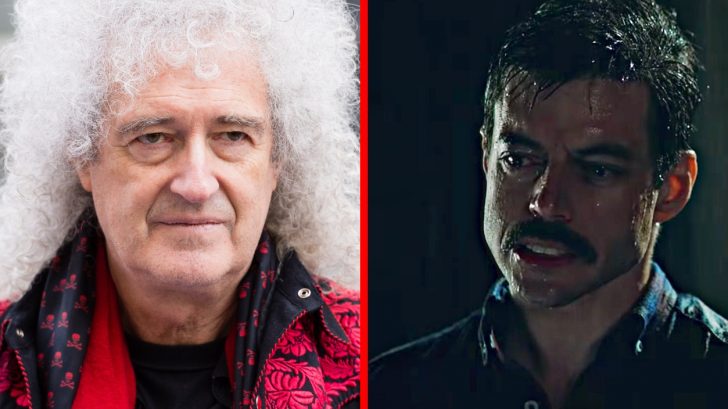 The long awaited Freddie Mercury biopic ‘Bohemian Rhapsody’ has been in theaters for exactly one month now and is currently dominating the box office with a whopping $540.7 million in reported earnings thus far.

As you’d probably expect, the film is getting tons of praise, but also equal parts criticism from true Queen fanatics, and guitarist Brian May is NOT having any of it…

During a recent interview with Louder Sound, Brian was asked this question: “The film ends with Queen playing Live Aid in 1985. Was there a temptation to go beyond that?” He gave his answer, but in doing so also took a shot at critics of the film who claim to know more than they actually do. Here is his answer…

“No. I think there’s a natural culmination there. And that has pretty much always been the case, from the earliest scripts. We felt that was the pinnacle – despite what some people have said in the press, who know fuck-all about it.”

“Somebody who shall be nameless said: ‘Oh, they’re going to portray Freddie dying in the middle of the movie, and then the rest of it is gonna be about life without Freddie.’ Well, complete bullshit. This is all about Freddie, and I think Live Aid is a good point to leave it. Who knows, there might be a sequel [laughs].”

Thus far, despite its financial success, ‘Bohemian Rhapsody’ is receiving criticism for a number of reasons. One for how they seemingly mishandle Freddie Mercury’s sexuality and diagnoses, and also for the inaccuracies in the film’s timeline among many other things.

While Brian’s comments may seem sharp, keep in mind that this is as much his story as it is any other Queen member’s. ‘Bohemian Rhapsody’ was several years in the making and encountered many road-bumps on its journey to completion.

If you haven’t seen the film, I highly recommend that you do so. Be sure to check out the trailer below.