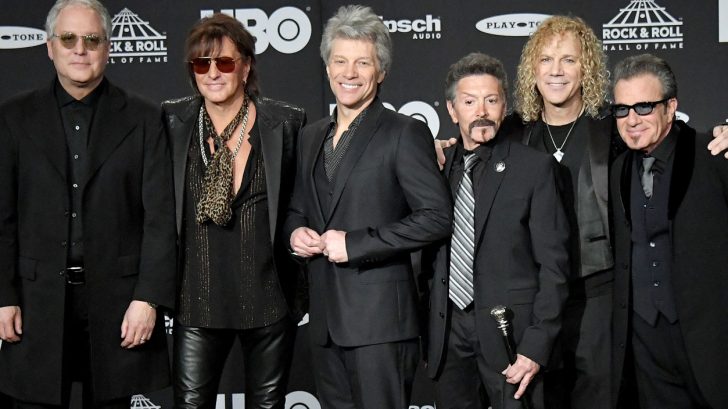 For a fleeting moment Saturday night, all was right with the world. The best and brightest in rock music finally took their rightful place in the Rock and Roll Hall of Fame after decades of blood, sweat, and tears in a night that saw some inductees, who sadly didn’t live to see the fruit of their dreams realized in that moment, were finally honored in the way they’ve always deserved.

Thankfully, it didn’t take Bon Jovi quite that long to see their big moment and in true Bon Jovi style, New Jersey’s finest made it a moment to remember. Inducted by shock jock Howard Stern, Bon Jovi’s induction was one of the most talked about moments of the night, namely because it marked the first time the band’s original members took the stage together in decades.

Joined by former members Hugh McDonald, Alec John Such and Richie Sambora, Bon Jovi’s joyous night was made even more so as they were finally reunited with major pieces of the Bon Jovi puzzle and no one seemed to notice the years that had passed since they’d all seen each other, least of all the band.

“I’m very proud to be inducted with these guys,” said Sambora during his acceptance speech. “If I wrote a book, it would be [called] ‘The Best Time I Ever Had’.”

He later recalled the moment he walked into the room, sharing a pretty sweet story about how he and his bandmates reconnected over dinner.

“There’s a lot of love here, that’s for sure. When I first walked in, we hadn’t seen each other in three years, and they go, “Does it feel awkward?” No… it doesn’t feel awkward at all,” he began. “You kind of just fall in. There’s a caste system in every band, really. Everybody has their distinct jobs that they have to do. … And one of the things I always did was try to keep everyone in the band in a happy mood. I’m that kind of guy, and I keep morale up. That’s another job that I did: keeping Jon happy, because he’s intense; he’s got a lot of stuff on his mind, and he does that to himself on purpose.”

Jon Bon Jovi reflected on his earliest days with his bandmates, thanking them for several years well spent. “It’s about time — that has been the theme of my weekend. I thank my lucky stars for the time I got to spend with each of you. Tonight the band that agreed to do me a favor stands before you so I can make this reality a dream.”

For Such, who left the band in 1994 and has kept a relatively low profile ever since, the magnitude of being inducted into the Rock and Roll Hall of Fame alongside his friends wasn’t lost on him.

“These guys are the best,” he said while looking at his bandmates. “I could get a little teary here, so bear with me. We had so many great times together and just…we wouldn’t be here if it wasn’t for those guys. Love ’em to death, always will,” finished Such, before introducing his replacement, Hugh McDonald, who thanked Jon Bon Jovi for including him.

The night culminated in one great big Bon Jovi bear hug before all six members plugged in for a positively explosive live performance, the band’s past and present colliding on the same stage for the first time. Fan favorites “You Give Love a Bad Name,” “It’s My Life” and “Livin’ on a Prayer” got the crowd up and right on outta their seats, while This House Is Not For Sale’s breakout track “When We Were Us” reintroduced Bon Jovi to the world as a living, breathing piece of rock and roll history.

Whether you love Bon Jovi or can’t stand ’em, there’s no denying that these legends have more than earned their spot in the Rock and Roll Hall of Fame, and it was an absolute joy for everyone to be able to witness this moment live and up close!