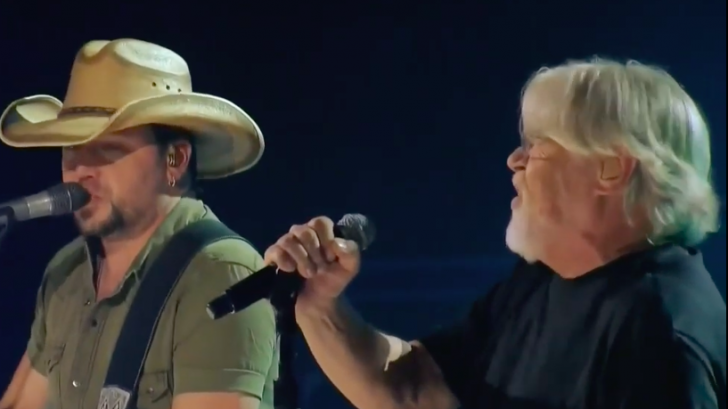 Aldean himself has admitted the Seger is one of his biggest musical heroes, so to share the stage with the accomplished musician was a dream come true for him as he told the audience that he started his career singing Seger’s songs in local clubs as a teenager. Seger also was on fire, giving it his all and enchanting the live audience as well as the millions watching the broadcast of the show.

Aldean commemorated his dream-come-true moment with a photo taken with Seger backstage and posting it on Instagram with the caption “One of my idols came out to the show last nite.”

One of my idols came out to the show last nite. The one and only Mr. Bob Seger. #turnthepage #detroit #concertforthecure #bobseger

It seems like both talented musicians had a blast performing together, and their duet of “Turn the Page” was definitely a highlight of the ‘CMT Crossroads’ show. The two artists were backed up by Seger’s touring band. The two singers also performed “Against the Wind,” and “Just Getting Started” along with a few new songs.

At his age, it’s enthralling how Seger could still hold his own, dancing to and commanding the stage at every song they sang.

The multi-talented, multi-awarded singer, songwriter, and producer truly is a legend to behold and has established his place firmly in rock and roll history. In fact, he was actually inducted to both the Rock & Roll Hall of Fame and the Songwriters Hall of Fame and has sold over 52 million albums.

Aldean, on the other hand, isn’t doing too badly. His single, “Burnin’ It Down” from his sixth studio album earned platinum certification in only nine weeks, making it the fastest-selling single of 2014.  Aldean has sold more than 10 million albums worldwide!