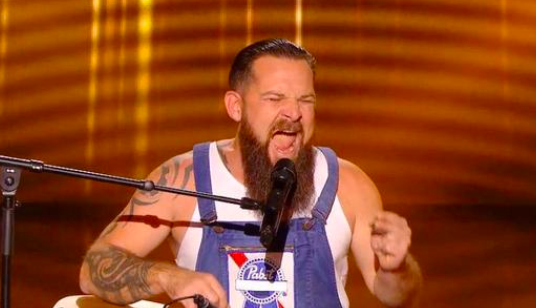 A one of kind rendition for his audition!

It starts out mysterious and a bit quiet as Will Barber begins his blind audition for the sixth season of The Voice France or La Plus Belle Voix. Mr. Barber has a unique rock grunge and edge to his voice that the judges just couldn’t resist as he performed his bluegrass-inspired rendition of the classic rock hit “Another Brick in the Wall” by Pink Floyd. By the time he hit the chorus, the audience were on their feet and all four judges of the singing competition have pushed their buttons for Will. Although Barber initially thought of impressing the judges as somewhat t challenging, the judges had nothing but praise for his ability to turn his Pink Floyd cover into something so unique and memorable.

Barber was first introduced to music and the world of classic rock by his father. He also describes himself as a performer and a composer. When he decided to do something so far removed from “Another Brick in the Wall’s” original arrangement, he was scared of how the judges and the audience would react. His bluegrass style complemented by his impeccable slide-guitar skills and gritty vocals was an instant hit. Even if the arrangement was not something people are used to hearing, it was well-received and with that performance, he’s definitely gained a solid following.

In his other performances, it is obvious that Barber uses the combination of blues and soul in covering renowned hits. His very own unique style and musical ability certainly made an impression with the judges and anyone who has watched his performance.

You don’t have to be a music expert to know how talented this man is and you will surely be stunned by Barber’s strong vocals and his brilliant cover of this Pink Floyd classic hit!

Check out his phenomenal The Voice blind audition below: