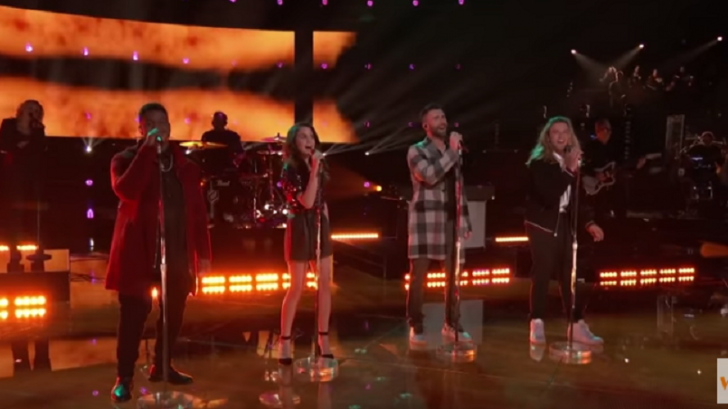 This Is How Covers Should Be Done

You gotta love it when the teams on The Voice and their coaches throw everything into a performance.

Last November 20, Adam Levine took the stage along with DeAndre Nico, Reagan Strange, and Tyke James to perform the Fleetwood Mac classic hit “Rhiannon.” Adam obviously delivered the goods and performed well but Reagan Strange proved that this song suited her perfectly. She shined in this performance and truly showcased her golden pipes. Even DeAndre Nico killed it too!

“Rhiannon” is one of those tunes that’s basically untouchable. Stevie Nicks made it flawless and anyone who tries to do their own rendition will immediately be subjected to comparison with the original. But in this case, the team somehow breathed new life into it. It’s not overly done – on the contrary, it’s entertaining and relaxing to listen to. They surely picked the right song to display their spectacular vocal talents.

“It wasn’t until 1978 that I found out about (Welsh medieval prose tales) Mabinogion and that Branwen and Rhiannon are in there too, and that Rhiannon wasn’t a witch at all; she was a mythological queen. But my story was definitely written about a celestial being, I didn’t know who Rhiannon was, exactly, but I knew she was not of this world.” – Stevie Nicks

While this performance is incredibly stellar, we can’t help but wonder how it would sound if they covered it individually. We’d love to hear DeAndre’s version because we can see that he feels totally at home with this kind of song. And of course, Reagan, she can pull this off easily. We’re not so sure about Tyke because clearly, this isn’t his finest musical moment during the entire show. He had better performances, to be honest.

Overall, while it’s not exactly spine-chilling or jaw-dropping, it’s still unforgettable for all that.