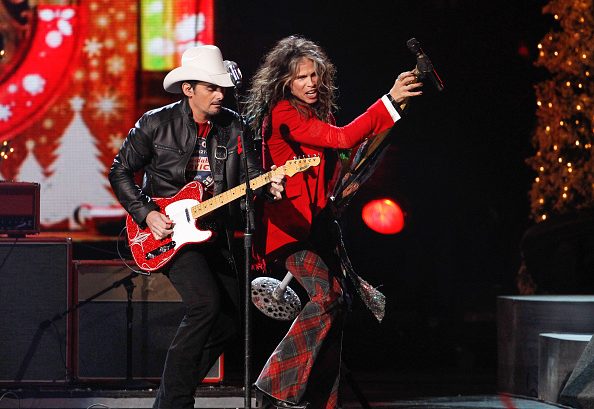 Dynamic Duo At the CMA’s

Steven Tyler and Brad Paisley are among the best representatives of their respective genres- rock and country. For a very lucky crowd, both music icons came together in 2014 at the CMA’s for an unforgettable live performance. The duo came together to deliver an adrenaline charged show. Steven Tyler charms the host with his own mistletoe and Paisley tells the crowd he has been a fan of Tyler’s since he was 2 years old. Both musicians had the crowd in stitches. Tyler goes on to profess his love for country music to the CMA audience “It’s in my heart-BIG,” he voices. Complete with Christmas trees and a full band, the stage was a celebratory spectacular for their “Run, Run, Rudolph” production.

A Little Something for Everybody

The staging is perfect, the performers are perfect and the music was on point! Brad Paisley’s red and white guitar is a stunner as he jams to the Christmas classic. Steven Tyler does his groovy dance thing when he pulls out his harmonica and takes the timeless “Run, Run, Rudolph” to a completely new level. Every one in the room is on their feet dancing to this legendary duo. It’s hard to think anyone could be still during such an energized performance! This Christmas cover of Chuck Berry’s “Run, Run, Rudolph” is a crowd pleaser for sure. When you combine rock and country everyone has a reason to sing along.